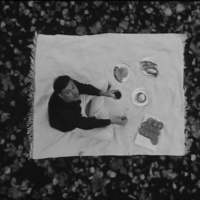 The band has partnered up with Bafta Award winning director John Maclean, the brother of Django drummer/ producer Dave Maclean, for the “Hand of Man” video. They are excited to present this beautifully shot, monochromatic masterpiece, premiered this morning on Nowness. John expands on the film:

“Filmed on black and white super-8 stock. The end of great things. The party was the last day in our friend’s building which will inevitably be knocked down to make way for more dodgy flats with tiny triangle balconies – art, film and music studios destroyed to make way for fast-buck housing developers pricing the working classes and the artists out of central London. The end of film developers and Kodak film stock. And the beginning of great things, Django Django, the spirit of youth, integrity finding a way to live forever, and fresh bread.”