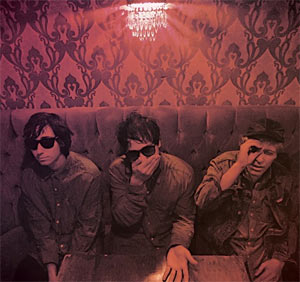 On the heels of a year that has seen the release of their new LP II, non-stop touring. Unknown Mortal Orchestra is back today to announce Blue Record. This will be released digitally as an Expanded Version of II on blue vinyl. Some copies of the vinyl will be available ahead of release on the upcoming US tour. Speaking on the EP, Ruban said:

“I only started playing the acoustic guitar last year. I’d always preferred the idea that the guitar converts a sound into voltage and then becomes really loud. I thought the acoustic guitar was a little bit too twee for me or something. But after being offered some opportunities to play various acoustic sessions to promote the new record, in situations where it wasn’t possible to record the whole band, I decided to treat it like a challenge to try and play acoustic and not have it be lame. After all I was really into Arthur Lee’s ability with an acoustic and started wondering if I could make it sound convincing. Anyway, after being somewhat forced to develop some skill on the acoustic through these various radio sessions and things like that I decided to record some songs acoustically and release them since people seemed to be liking the way I was doing it. Everything was recorded straight to tape in my basement with a one mic set up.”

“After recording three songs from II I started thinking about doing some other songs that I like. I thought that I’d do an old song I’d always liked even when I was a kid and a new song that I’ve been listening to a lot recently. The old song is ‘Puttin It Down’ by Beck. It’s on the album Stereopathic Soulmanure and I always loved the lyrics. So funny and so sad. To me this song is super real. The new song is ‘Swing Lo Magellan’ from the album of the same name by Dirty Projectors. I like how this band who kind of specialize in melting brains leaned on pure melody on that album. The more I listened to it the more I realized how strong this melody was. I found myself listening to it a lot. It reminds me of Velvet Underground or Transformer era Lou Reed for some reason. When I saw them play last they opened with this song and I hadn’t heard that album yet and was like ‘wait what’s that one?'”

Blue Record will be released on October 29th by Jagjaguwar.