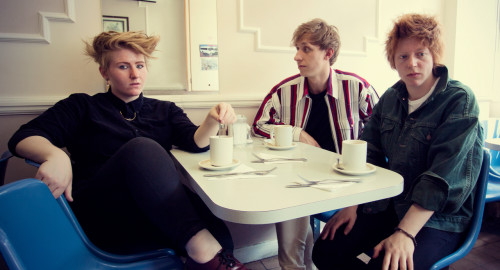 Known for their live presence, London three-piece Playing House have now committed their alt-pop sound to tape, with debut of their EP ‘New Haircut’, out today.

Combining jagged guitars and heavy vocals, the band – formed just over 10 months ago – create pop songs, exploring the anxieties of life with a frank, and at times, painfully honest intensity recalling the spikey art pop of Talking Heads, the voracious yelp of The Slits and the dance inducing thrust of Everything Everything. Stemming from the vibrant East London queer community, Playing House are all about subverting the norms of pop music with their honest and autobiographical writing about themes such as “birth, death, anxiety, growing and isolation.”

The first single and title song from the 3 track EP, “New Haircut”, is a potent introduction to the sound of the band. Beginning with defiant-sounding guitar, and building with the twitching fragility and freneticism of the vocals, the song stays true to their autobiographical form, turning the tale of a broken home and violent upbringing into a shimmering slice of empowering dancefloor alt-pop.

The “2 girls and 1 guy” that make up Playing House admit they are “obsessed with pop music in all forms” and the “science of creating pure pop music,” citing influences as diverse as David Bowie, Velvet Underground and Chic.

Playing House say that their name “comes from the idea that we are all learning how to be a grown up and the pressure to keep it all together” and their songs are full of honest observations on life, love and a fear of everything. But closer ‘Grapefruit’ seems to contain a kind of Phoenix-like optimism, a youthful refusal to accept despair as an option, even in the fiery face of things.

The band first unleashed their sound on the London live circuit in September 2015 with a show at St Giles in The Fields Church, hosted by Kal Lavelle for her We Love Shows series and have continued with support shows at The Coronet, Servant Jazz Quarters, Old Blue Last (BBC Introducing) and Lock Tavern supporting Beverly (Kanine Records, Brooklyn).