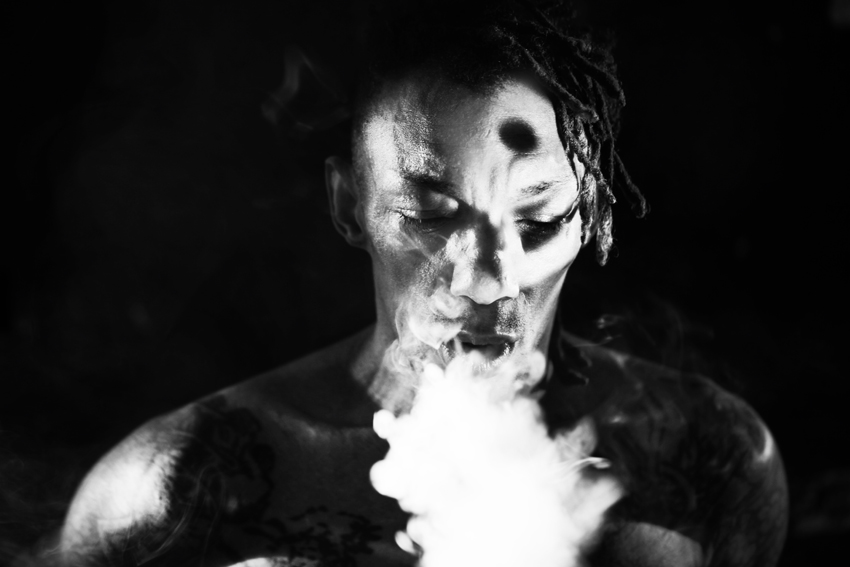 Adrian Thaws has had a rather interesting career as Tricky. Throughout the years from Maxinquaye to now he’s always been pushing the boundaries whether it be genre or gender for that matter. A collaborator for the ages, Tricky has made a career out of knowing exactly who to work with. On his new album Ununiform he brought in a host of Russian hip hop greats and even wrote his first song with Martina Topley-Bird in over a decade. We caught up with Tricky ahead of the album’s release to talk about his album’s bright sound, life in Berlin and looking inwards on his new music.

Northern Transmissions: You seem to have a magnetic pull to collaborating over working on your own, so I was curious what pulls you there more than solo recordings?

Tricky: Usually if it’s an artist who’s well known, nine times out of ten they come to me versus me accidently meeting someone. Whether it’s the Chili Peppers or whoever else, they’ve usually come to me.

NT: I’m sure it’s always different but considering how often you collaborate, are you always writing songs and bringing in artists to feature these days or do you really just sit down and write with them?

T: I don’t usually write with someone. I usually write the lyrics for someone, or if I hear a song that someone has done already and I like it, I get them to send me the vocals and I work around that. Usually if I’m in the studio with someone, I give them the words, show them a melody, and it’s all done there and then. I’m not really into giving them the song, they learn it and then come back two days later, I can’t wait two days. I don’t like waiting, once I’ve wrote something I want to hear it there and then.

NT: How did you and Martina Topley-Bird come to record together on this record considering you haven’t played together since in over a decade?

T: Well we’ve got a kid together, so we’re always in contact. It’s not like we haven’t talked in 20 years and are just getting in contact. She wants to do a whole albumm and I was thinking I’m busy right now and am not sure that I can do a whole album. I have this song “When We Die” so let’s just see how this track goes. It’s like don’t have time for an album now so just come on my album, the timing was just right. There has to be a reason to do an album, not just because people want to hear it. Lots of people want to hear me and Massive Attack together again, doesn’t mean it’s going to happen. After seeing what the vibe was, I can say there would be reason for us to make an album again, it was testing the water really.

NT: I feel like there’s definitely a lot of darkness to a lot of your work but what I’ve heard of your new record sounds hopeful, what’s changed to create this shift?

T: I’ve got rid of the taxman, I’d had tax problems. For the last couple years, everything that I’d been doing was going to the taxman. I’m not in it for the money, but it’s weird to create something and immediately give it away, my last couple albums went right to the taxman. I had a deal where I had to pay a monthly fee to the taxman. It was very much get the album done fast, go out on tour so I can make enough money in a year to pay them, and I got sued as well. It wasn’t like I was homeless or anything like that, but there was a lot of pressure. Now I haven’t toured in ages now, but the last couple years I was touring constantly, I couldn’t sit down and say “I’ll take three months off now.” This is the first time I’ve had off in two years and not constantly on the road, so that’s why I finally made this album. I didn’t have to think about touring with this album.

NT: Something that’s always intrigued me about your music, especially when you started was how well you captured the essence of city life, notably for London so what attracted you to move to Berlin?

T: It’s cause it’s so mellow here, they’re more about quantity than quality. For instance you see people here working three days a week instead of five, or someone will do something they love for less money. They’re more into the quality of life, it’s not about driving the biggest car or anything, people aren’t showing their money here, wealthy people are riding bikes. It’s one of the few cities I’ve been to where money isn’t everything.

NT: When you write now do you still find inspiration from the city or is your life more than enough?

T: The influence is more on my upbringing now because that will always be with me. If I recorded an album in Vietnam, there might be some Vietnamese instruments but it’s still me. The more relaxed you are, the more you’ll do. When you live in a really big environment and you’re moving fast, you feel like you’re doing a lot but you’re not. I’ve done more here than any city I’ve lived in because it’s slow here, and you get more done.

NT: Coming from the West most people probably aren’t even aware of Russia’s hip hop scene so how did you come to work with Scriptonite, Smokey Mo and Vasily Vakulenko?

T: Smokey Mo and Vasily (or Basta) biggest rappers in Russia, they helped bring rap to Russia, they’re responsible for making it so big there. They’re really legends there for that. I’ve been going to Russia for years, I’ve met this guy Alex there 15 years ago and we always stayed in contact. Sometimes I’d go to Russia outside of touring just to see him, and he’d come to Paris or New York to see me. He’d play me these guys back then. Because of him I was hanging out and actually seeing Russia.

NT: What’s it like seeing how rock and hip hop have taken to pushing the boundaries of gender considering you were doing this almost two decades ago?

T: It’s crazy but only a few people are doing it. It’s funny it’s just not my thing now, not that I think it’s a bad thing now, it’s just not my thing at this moment. Most of these guys probably have no clue who I am, they’re not even influenced by me, it’s cool. Sometimes I wonder if they’d ever hear of me or seen me in a wedding dress. I always think the younger generation don’t know who I am but I’ve had people tell me they do, it’s strange is all.