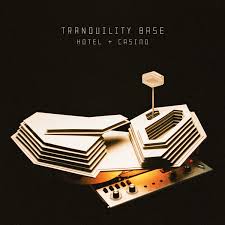 The writing was on the wall as soon as Arctic Monkeys announced their sixth LP ‘Tranquillity Base Hotel & Casino’, something was different. From the rollnecks and the dubious facial hair to the headline splashed across Mojo’s June cover “we can do anything!” coupled with the fact the record came to life by Alex Turner writing on a piano instead of a guitar – initially it seemed that the Sheffield outfit’s latest effort could end up as a Turner solo project – the band’s new album was going to be a curveball. Ladies and gentlemen welcome to Arctic Monkeys: the lounge act.

Whilst it matters not that guitars have taken a back seat on ‘TBHC’ – if the boys concocted an album to the sound of a wooden spoon being whacked on a saucepan and the results turned out to be good who am I to judge the band’s methods – however 11 tracks of tepid lounge-pop that veers towards elevator jazz means the four-piece’s next instalment is remarkably underwhelming. The overall sound would have worked nicely as a low-key solo EP with Turner’s name on it. The band and Turner have always carried a rich, penchant for days gone by when they ratchet down the volume – see their cover of ‘Baby I’m Yours’, ‘Favourite Worst Nightmare’s ‘Only Ones Who Know’ and the swooning closing track from ‘AM’ ‘I Wanna Be Yours’ but on ‘TBHC’ this overhaul to their sonic aesthetic falls short, at times its dull and a little cringey. We wouldn’t want the band to rattle out facsimiles of ‘I Bet You Look on the Dancefloor’ forever more, plus witnessing a band evolve, as Arctic Monkeys have done, from teenage indie-scamps, dabblers into desert rock and slick rock ‘n’ rollers, is part of the allure of being a music fan but it’s hard to shake off that ‘TBHC’ feels self-indulgent – taking the “we can do anything!” mantra way too far this time around.

Alex Turner is, arguably, one of the best lyricists of his generation but on ‘TBHC’ his wordplay resembles
something closer to rambled gibberish twinned with a croon that feels contrived, mixed with beige background music, it’s hardly a winning combination. “Dance in my underpants/I’m gonna run for government/I’m gonna form a covers band” opens ‘One Point Perspective’ while this nonsensical babble crops up on the album’s eponymous track “Jesus in the day spa/filling out the information form/momma got her hair down/just popping out to sing a protest song/I’ve been on a bender” – no shit mate, you’re drunk Alex, go home! Genuinely, there are moments on ‘TBHC’ where it feels like this album is an elaborate joke – Flight of the Conchords-style but the joke isn’t funny.

There are some moments of redemption to be found on Arctic Monkeys’ sixth effort; ‘Four Out Of Five’ has a pleasing stomp and ‘Golden Trunks’ fuzzy riff makes a nice variation on the flaccid piano and drum motifs. Plus, the album holds some fantastic song titles – ‘The World’s First Ever Monster Truck Front Flip’ and ‘Batphone’ being two of them. In a weirdly prophetic manner the record is capped off by ‘The Ultracheese’ which sums up ‘TBHC’ – given how much the album whiffs of ripe fromage.

It’ll be interesting to see how this album effects Arctic Monkeys’ legacy, as up until now they’ve been untouchable with a near immaculate output. There’s no doubting that ‘Tranquillity Base Hotel & Casino’ is going to be a polarizing album – I guess time will tell. One thing is for sure I’ll not be checking back into the ‘Tranquillity Base Hotel & Casino’ anytime soon.