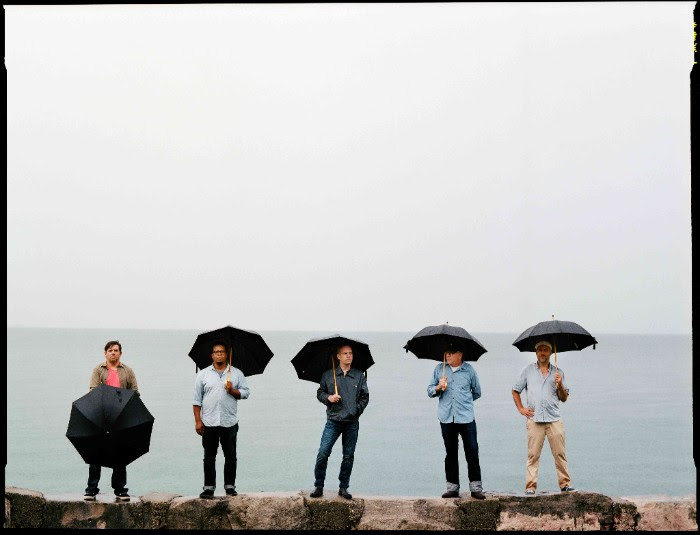 While the Chicago-based instrumental quintet, Tortoise, has nodded to dub, rock, jazz, electronica and minimalism throughout its revered and influential six-album discography, the resulting sounds have always been distinctly, even stubbornly, their own.

This fact remains true on The Catastrophist, Tortoise’s first studio album in nearly seven years. It’s an album where moody, synth-swept jams like the opening title track cozy up next to hypnotic, bass-and-beat missives like “Shake Hands With Danger,” a downright strange cover of David Essex’s 1973 radio smash, “Rock On,” sung by U.S. Maple/Dead Rider’s Todd Rittmann, and the bittersweet, honest-to-goodness soul ballad “Yonder Blue,” sung by Yo La Tengo’s Georgia Hubley. Throughout, the songs transcend expectations as often as they delight the eardrums.

Tortoise, comprised of multi-instrumentalists Dan Bitney, John Herndon, Doug McCombs, John McEntire and Jeff Parker, has always thrived on sudden bursts of inspiration. And for The Catastrophist, the spark came in 2010 when the group was commissioned by the City of Chicago to compose a suite of music rooted in its ties to the area’s noted jazz and improvised music communities. Tortoise then performed those five loose themes at a handful of concerts, and “when we finally got around to talking about a new record, the obvious solution to begin with was to take those pieces and see what else we could do with them,” says McEntire. “It turned out that for them to work for Tortoise, they needed a bit more of a rethink in terms of structure. They’re all pretty different in the sense that at first they were just heads and solos. Now, they’re orchestrated and complex.”

The album’s debut single “Gesceap” embodies the transformation of the original suite commissions, as it morphs from two gently intersecting synth lines into a pounding, frenzied full-band finish. “To a certain extent it’s more of a reflection of how we actually sound when we play live,” says McEntire of Tortoise’s heavier side.

Tortoise has conjured sounds on The Catastrophist that aren’t being purveyed anywhere else in music today. There’s a deeply intuitive interplay between the group members that comes only from two decades of experimentation, revision and improvisation. And at a time when our brains are constantly bombarded by myriad distractions, The Catastrophist reminds us that there’s something much greater out there. All we have to do is listen.

Tortoise’s The Catastrophist is out January 22nd on Thrill Jockey Records, and available for pre-order now. All pre-orders from Thrill Jockey mailorder come with a t-shirt designed by John Herndon. The band will play a special hometown record release show in January, and will tour North America next spring. All dates are below. More will be announced soon.