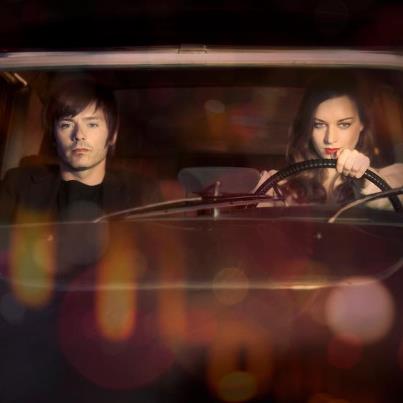 Tomorrow’s World is a joint venture between London-based singer and musician, Lou Hayter and Jean-Benoit Dunckel of the French band Air.  Their self-titled debut album of cinematic love songs – informed by the likes of Factory Floor, Angelo Badalamenti and Lil Louis – will be released in Canada on April 9th on Parisian imprint Naïve Records through Distribution Select. Watch for a video for new single “Drive”soon. Recent single “So Long My Love” is a noirish cut of Suicide-meets-Shangri-Las.

Watch the video for “So Long My Love” here or by clicking the still.
In Tomorrow’s World, Jean-Benoit and Lou write all the music together. The pair began recording together in Paris in the summer of 2010 after Lou was recommended to Jean-Benoit, who had been toying with the idea of working with a singer during a break from Air. He heard Lou’s solo project, The New Sins, and liked her voice so much that he invited her to Paris to see what could happen in the studio. The chemistry was undeniable. “We wanted to do just one track but ended up doing 11,” says Jean-Benoit.
Though Tomorrow’s World already bear the hallmarks of a classic synth duo, Lou was initially daunted by the idea of fronting the band but she feels happy when with her new partner.  “I feel confident with JB because I don’t think it is just about me, it’s about a shared responsibility,” she says. “We both sing and we’re both equal partners, so I don’t feel alone.” “It’s good to be in danger,” adds Jean-Benoit. Tomorrow’s World: one full of intrigue and wonder.
TRACKLIST
1. A heart that beats for me
2. Think of me
3.Drive
4. Pleurer et chanter
5. So long my love
6. Don’t let them bring you down
7. Metropolis
8. You taste sweeter
9. Catch me
10. Life on earth
11. Inside
www.tomorrowsworld.fr
www.naive.fr