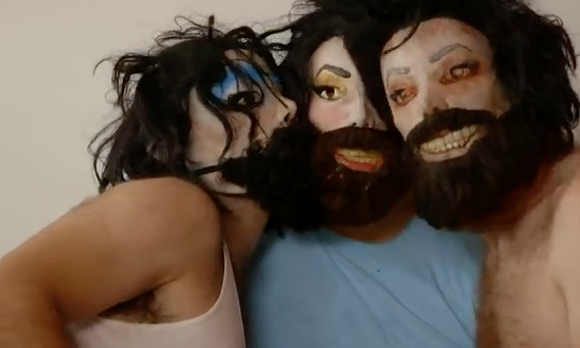 TOBACCO’s newest album Sweatbox Dynasty, out now on Ghostly International, finds the rural recluse resurrecting an old approach to hack a new path through the muck. It may be his most unintentionally psychedelic and left-field creation yet, full of rhythms that start and stop like a tractor on its last piston, resonating melodies made to fuel transcendental meltdowns, and vocals that hiss, gurgle, and growl. The name of the album is an apt description for his vast empire of moldering electro-fied dirt, and his latest quasi-NSFW video for the track “Warlock Mary” is packed with disturbing mental images yet packed with… passion. Watch the video on YouTube.

TOBACCO is on tour now too, so be sure to mark your calendar for the day that Tobacco will be invading your city or town in October and Novembner. Full list of dates below, and order Sweatbox Dynasty at The Ghostly Store, from TOBACCO directly, or the retailer of your choice.

On an album with no guests, the tape deck is TOBACCO’s one true collaborator—the Second Zombie Beatle there to eff up all his prettier inclinations. Like how the sticky coast and thump of “Dimensional Hum” keeps getting derailed by what sounds like a fritzy radio dial, and the stonery dub of “Fantasy Trash Wave” bends and snaps over its slippery breakbeats. “An album of linear songs is just boring at this point,” says TOBACCO, and he makes extra good on his promise to innovate ever more crudely with Sweatbox Dynasty’s closer. At over six minutes, “Let’s Get Worn Away” first plays like eleven more songs spliced together at unpredictable intervals—jock jams collide against rap bumps, synthesizer ether, and shadowy electro-pop. But on repeated listens, madness clearly becomes method, as our anti-hero lulls us into a state of intense, earned peace. This time when he stops, he’s got closure, and we’re the ones left with an undeniable urge to dig our hands back into that aural gunk once again.

It’s been almost two decades since baby TOBACCO first plugged in a tape deck, popped the top, and found the dark magic that’s fueled so many sonic forays into his genreless bog of beat-blasted hypnagogia and otherworldly-yet-earthen pop. The Pennsylvanian experimentalist has since helmed countless Black Moth Super Rainbow releases, remixed outsiders as offbeat as HEALTH and unexpected as White Zombie, and produced MCs ranging from Aesop Rock to Beck.