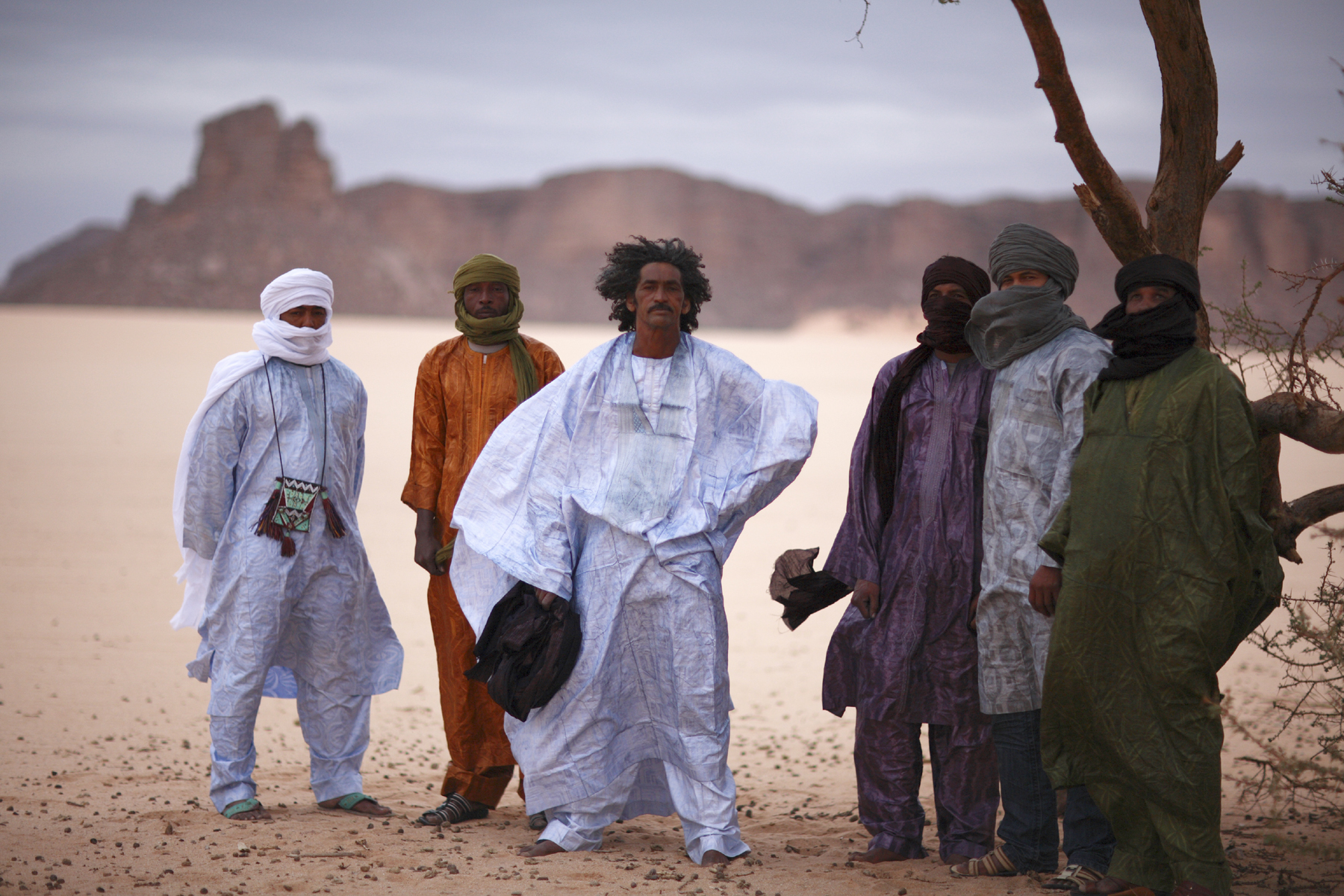 Saharan band Tinariwen have announced the details of their 2017 North American headlining tour. Kicking off on March 30th in Solana Beach, CA, the tour will hit both coasts wrapping up in Pittsburgh on April 21st. The acclaimed band has also unveiled their new single “Sastanàqqàm” from the forthcoming album, Elwan which features appearances by Kurt Vile and Mark Lanegan.

“This song is an ode to the Sahara and its Nomads,” explains Tinariwen’s Abdallah Ag Alhousseyni. “It expresses the needs of the traveller as he crosses the desert on his mount. Essential needs: find water and a way to preserve it, find a good mode of transport. But also the love-hate relationship with the desert, the natural elements and the certainty that we will always go back to it.”

TÉNÉRÉ, CAN YOU TELL ME OF ANYTHING BETTER THAN TO HAVE YOUR FRIENDS AND YOUR MOUNT,
AND A BRAND NEW GOATSKIN, WATERTIGHT,
TO FIND YOUR WAY
BY THE LIGHT
OF THE FOUR BRIGHT STARS OF HEAVEN,
TO KNOW HOW
TO FIND WATER IN
THE UNLIKELIEST OF PLACES, AND ENLIST THE MOMENTUM OF THE WIND
TO HELP YOU MOVE FORWARD

TELL ME, TÉNÉRÉ
HOW YOU AND I
CAN REMAIN UNITED,
WITH NO HATE FOR EACH OTHER.
TÉNÉRÉ, I CAN NOW ADMIT THAT
I HAVE TRAVELLED FAR THROUGH THIS WIDE WORLD.
TÉNÉRÉ, I GIVE YOU MY OATH
THAT AS LONG AS I’M ALIVE,
I WILL ALWAYS COME BACK

In recent years, Tinariwen’s homeland, a Saharan mountain range between north-eastern Mali and southern Algeria, has been transformed into a conflict zone. While the songs on the new record evoke those cherished deserts of home, they were recorded far away in two distinctive creative bursts.

In 2014 Tinariwen stopped at Rancho de la Luna Studios in the desert of California’s Joshua Tree National Park. The location proved auspicious as notable musicians dropped by to add their own touch. Guitarist Matt Sweeny (Johnny Cash, Bonnie Prince Billy and Cat Power), Kurt Vile, musician Alan Johannes, who produced Queens of the Stone Age, a band with whom Mark Lanegan, the other guest has been a singer. All of it honed by engineer Andrew Schepps, who has worked with the Red Hot Chilli Peppers, Johny Cash, and Jay Z. Two years later in M’Hamid El Ghizlane, an oasis in southern Morocco, near the Algerian frontier, the band set up their tents to record, accompanied by the local musical youth and a Ganga outfit (a group of Berber ‘gnawa’ trance musicians).

Elwan fits into that ‘road record’ category. In a road movie characters travel in search of some truth or revelation but end up reconnecting with their past. It’s the same for this record, so musically powerful and yet poignant: every song evokes a land that can no longer be found, with all that this implies in terms of emotional range, from nostalgia for a joyous past to the tragic recent loss of a territory, and of the dream that it nourished.