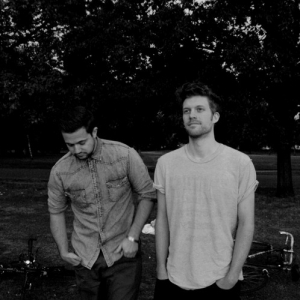 Recently announced Sub Pop signees THUMPERS will release Galore, their debut album, on CD/LP/DL in North America on February 11th via Sub Pop.  The album features 11 tracks, including the singles “Unkinder (A Tougher Love),” “Sound of Screams” and “Dancing’s Done,” and was produced, recorded and mixed by the band with David Kosten (Bat For Lashes, Everything, Everything). There will also be European label and release details shortly. Find the full tracklisting below.

You can now watch THUMPERS’ “Sound of Screams” video, directed by Annick Wolfers, which is now available for viewing as part of VEVO’s DSCVR “Ones to Watch 2014”. Check out that clip above. Additionally, you can stream “Unkinder (a Tougher Love)” via Soundcloud.

Comprised of long time friends Marcus Pepperell (vocals, guitar, keys) and John Hamson Jr. (drums, vocals, bass), THUMPERS make colourful, exuberant alt-pop that celebrates their innate musical kinship and draws upon their shared childhood memories. The London-based band combine layered androgynous vocals with muscular drums, astral synths and shimmering guitars in a celebration of the breathless sensations of youth and coming of age. Live, they are augmented by an interchanging cast of friends and musicians in faithfully bringing their sonic vision to the stage (read more at Sub Pop).

THUMPERS have a few UK tour dates to mention at this time: February 17th in Manchester at The Soup Kitchen; February 18th in Bristol at The Louisiana; and February 20th in London at the Lexington. Find a list of dates below.