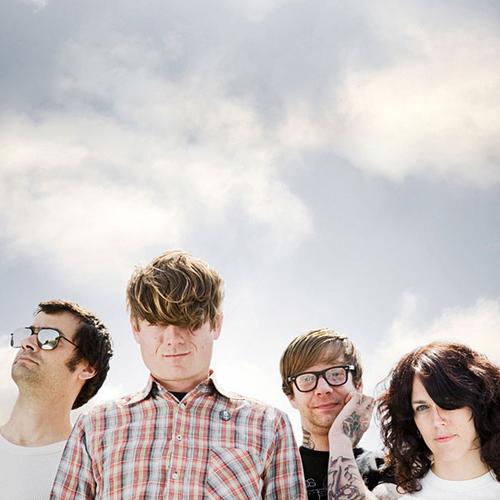 Chalk some of the band’s cunning chameleonic ability to Dwyer’s 20-year resume.  The driving force behind such beloved and sonically disparate bands as Coachwhips and Pink and Brown, Dwyer’s increased fidelity to Thee Oh Sees and only Thee Oh Sees is evidence of a new found sense of purpose and focus. Where once Dwyer used to funnel his divergent artistic ideas through a host of different channels, lately he’s been finding ways to make all of those impulses function within the framework of Thee Oh Sees — who have in turn grown closer and tighter and sharper with each eye-popping, jaw-dropping live show. As Dwyer puts it: “The family that plays together stays together.”

That sense of unity is palpable throughout Floating Coffin.  “I could have made the second half of this song last for hours,” Dwyer says. “This is another song that’s wary of the outside world, about humans staring down technology.” “Tunnel Time” opens with a short-circuiting synth sound before diving into haywire blast-furnace punk rock made more manic by Dwyer’s split-second hollers and howls. The skeleton waltz of “Minotaur,” which opens with Dwyer sighing, “Oil slick in my dinner,” gradually gives way to a distinct sense of optimism. “That one’s relatively less ominous,” Dwyer explains. “It’s about dream-hunting – being the person you feel you were meant to be.” That sense of release is summed up in a single lyric, which shows up just after a squad of swooping strings provides an impromptu serenade: “Stay home today – go to the beach instead.”