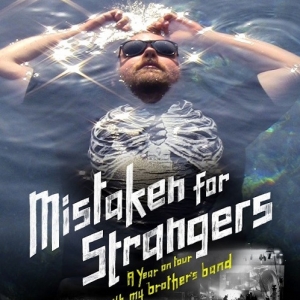 The National were set to embark on the biggest tour of their career. The band is comprised of two sets of bothers-twins Aaron and Bryce Dessner on guitar, and Bryan and Scott Devendorf on drums and bass. Lead singer Matt Berninger, the only member without a sibling in the band, decided to invite his metalhead younger brother, Tom, to join the band’s crew as a roadie. Much to Matt’s chagrin, Tom soon began to ignore his roadie duties in order to make an unsanctioned documentary about the band. Tom’s camera captures his journey as he finds himself living in Matt’s shadow and acting out in a way only a little brother can-drinking, complaining, and struggling to balance his ambition with his responsibilities. An amazingly intimate and surprising film, Mistaken For Strangers delves into the joys and struggles of brotherhood. The film, which opened the 2013 Tribeca Film Festival, will see its theatrical premiere on March 25, 2014 at the Shrine Auditorium in Los Angeles.  The gala event wouldn’t be complete without a performance from The National, so they will be on hand to celebrate with a full concert.

Tickets to the March 25 Shrine Auditorium show go on sale this Saturday, December 21st at 10:00 AM PST and are available here: http://www.ticketmaster.com/event/09004B900CD19E75

The National were nominated for “Best Alternative Album” in the 56th Annual GRAMMY® Awards airing January 26th. Formed in 1999, the band has released six studio albums including The National and Sad Songs For Dirty Lovers. In 2004 they signed to Beggars Banquet releasing  Alligator which features breakout anthem “Mr. November.” The album led the band to tour worldwide developing a passionate international fan base.