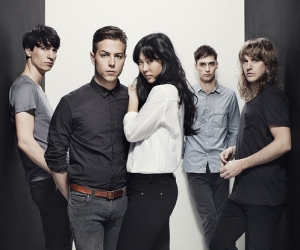 NZ/LA quintet The Naked and Famous have debuted a new video for ‘I Kill Giants,’ taken from their sophomore album, In Rolling Waves. Directed by Joel Kefali, longtime creator of the band’s videos and most recently Lorde’s. the track, is fronted by lead-singer Alisa Xayalith‘s personal and heartbreaking vocals, who elaborates, “at first I felt insecure singing about something so infinitely painful and blatantly autobiographical. But now I’m more comfortable explaining that ‘I Kill Giants’ is a song about losing my mum to breast cancer as a young girl. Thanks to Joel for directing such a beautiful video.”

The Naked And Famous have recently completed a North American tour, they have just added additional shows in New York and DC. They head to New Zealand and Australia for Big Day Out before returning to the states for another tour in February.

The Naked and Famous Tour Dates