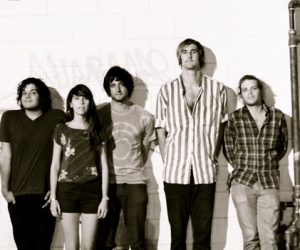 The Love Language return on July 23 with Ruby Red. Friends and fans of The Love Language songwriter and frontman Stuart McLamb have learned to expect a lot, but rarely in a timely manner. Completing a triumvirate of spiritual transmissions spent lost (2009’s The Love Language) and found (2010’s Libraries), 2013’s Ruby Red exorcises the transient brilliance fostered by McLamb within the sheetrock walls of the album’s namesake artist space.

Featuring over twenty musicians and straddling several time zones, songs were scrawled with lungs full of mountain air at a rented cabin in Black Mountain, NC, colored with spilled wine, and seasoned with the drawbars of a thrift store organ and tape echo. Royalty checks rendered from Forever 21’s propensity to play “Heart to Tell” in its stores took on the shape of russet potatoes, frozen chicken breasts, and Miller High Life. On the fringes of a Christian summer camp, during a month of days punctuated by bear sightings and eviction threats, McLamb and engineer/collaborator BJ Burton wrote and recorded, decompressed and conceived of where The Love Language might take them both.

The transcendental pop of “Calm Down” serves as an estuary for a collection of songs with no regard for what day it is. The kiss of dew and the glow of DMT inform “Golden Age,” which favors the synthetic strings of the overstuffed organ to McLamb’s symphonic allies featured on adjacent tracks. In the distance, the hemorrhaging leads of “First Shot” beget the slow hand of “For Izzy.” Trips to Minneapolis spur the heartland anthem of “Faithbreaker,” which occasionally reveals its southern citizenship with stray twang and rural bent. Clearing the beer cans off the upright piano, the threadbare “Pilot Light” eulogizes a marvelous collection of catch-and-release correspondences written in transition.