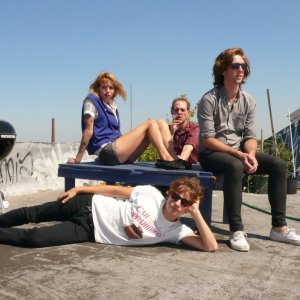 The Babies had previously shared a video for “Baby,” from their latest album, Our House On The Hill. Now, you can watch a new video for “Mess Me Around”. The video was directed by Bob’s Burgers writer, Scott Jacobson. The Babies are also starting a North American tour tomorrow, followed by a European tour that kicks off in May with an appearance at Primavera Sound Festival.

After their first full length album on Shrimper Records, a demos EP on New Images, and scores of singles on U.S. and international record labels, The Babies second album, Our House On The Hill, is their Woodsist Records debut and the first with new bassist, Brian Schleyer.

While the band was originally conceived as a side-project outlet for Kevin Morby and Cassie Ramone – along with drummer Justin Sullivan – to trade song ideas and play house parties, 2011 saw the project grow into a full time affair. The band spent much of the year touring the U.S. and abroad, all the while writing new material, both in their home of Brooklyn and during a two-month sojourn in Los Angeles.

In February 2012, the band swapped their usual environs of Brooklyn’s Rear House recording studio and spent two weeks in Los Angeles working with Producer Rob Barbato (Darker My Love, The Fall, Cass McCombs). The increased time and focus allowed them to explore musical directions only hinted at on their first album. Thus, Our House On The Hill features hushed dirges, melancholic traveling odes and squealing rave-ups. Organ, piano, saxophone and even strings play a supporting role in enhancing the aural atmosphere, which finds the band finally realizing a sound that can be called their own. Simple yet thoughtful; familiar yet haunting. Sweet but somber.