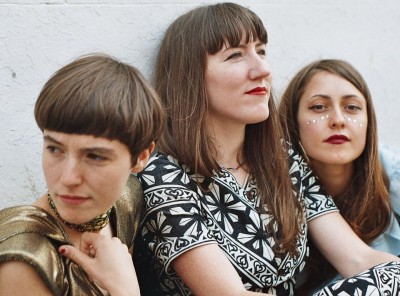 Following the release of their second album Not Real, STEALING SHEEP have just released their dance-filled video for their single “Apparition”. Directed by Dougal Wilson, the video creates the illusion of a candid single shot in an unassuming village square witnessing a group of Morris dancers that are infiltrated by the band. The band explains: “We liked the idea because the English folk imagery juxtaposes the moody synth style of the music. The Morris dancing goes surprisingly well with the electronic drums and made us laugh! We love the dreamlike flow of the choreography and the camera. It was Dougal that first introduced us to a female experimental film maker from the ’50s called Maya Deren and her style really influenced our visuals when we began working on our album, exploring dreams, subjective reality and streams of consciousness”

Not Real was written, recorded and produced by band members Becky Hawley, Emily Lansley and Lucy Mercer at their studio in Liverpool, and out not on Heavenly Recordings. The unifying theme of the new album is the interplay of fact and fiction; the edge of dreams and limits of reality. These visions are grounded by bright melodies and insistent beats and unified by vocal harmonies; sometimes metronomic and chant-like, sometimes choral and pop.

Stealing Sheep’s 2012 debut, Into the Diamond Sun, morphed their individual styles to create a ‘medieval-kraut-folk’ inspired sound. They were described as an unanticipated ‘pagan pop revival’ and since its release have toured as guests of Postal Service and Alt-J, opened for St. Vincent in Paris, performed the songs of David Lynch at the Barbican and collaborated with the Radiophonic Workshop on an original soundtrack to the cult 70’s science fiction film La Planete Sauvage.

For this second album they have concentrated on developing the sonic aesthetic of their music. “We were more focused about what we are trying to do. Everything has a reason for being there.” They’ve experimented with tuned percussion, programmed beats, trigger samples and worked with effected synths, utilizing the guitar and lap steel more sparingly and introducing more processed sounds. They’ve drawn inspiration from 50’s exotica, electronic music and 80’s pop and been influenced by the likes of Grace Jones, Maya Deren, Eden Ahbez, Delia Derbyshire, Moondog and John Carpenter.

The visual representation is highly important to the band, all of whom have art backgrounds. “We like to be involved in all the aspects of the presentation because it’s symbiotic to the music.” The colorful and organic album cover, a collaboration between photographer Charlotte Rutherford and collage artist Louise Mason, shows their confident image for this record as they tread the lines of surreal pop. Follow them on a hypnagogic journey as they sing: “listen to yourself and look within”.