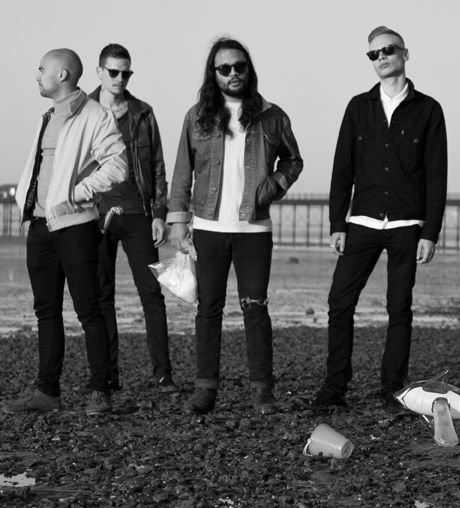 Today, Uk band States of Emotion, premiere their single have been through enough drama already, thanks. They deserve a good 2016. In the past three years, the Essex natives have endured enough label and wider industry shenanigans that would kill a lesser band. But Olly Hookings & Bonzai have spines of steel and an arsenal of shimmery guitar pop, and by God, their long shelved album “Black and White to Gold” is finally going to be released in February.

From the TV On The Radio esque, dark electronic stomp of “Rag n Bone Men” (a song that lyrically salutes 2 fingers to the former record label that signed and shelved them) to the jubilant, uplifting, U2 inspired “Lena” there’s something here for every lover of alternative guitar music across the globe.

Vocalist and guitarist Olly Hookings grew up in Essex with an alcoholic mother, with whom he still lived following his parents’ divorce when he was nine. Like many children with an addicted parent, he sought out music that provided him with a soothing emotional outlet.

In 2001 Olly formed States of Emotion at age 15 with school friends Bonzai on bass and Luke Lloyd on drums, at first playing bad Green Day covers in the summer house at the bottom of Olly’s grandmother’s garden.

Their self released debut single “The Unsung” came out in 2010, featuring long time fan of the band James Buckley (of “Jay” Inbetweeners fame) in the music video,

Off the back of the underground success of “The Unsung” States of Emotion took the plunge in signing a record deal, becoming the first guitar band, urban label Rinse added to their artist roster, a move which surprised everyone.  After signing with Rinse they embarked on an enjoyable tour with The Enemy but then… nothing else seemed to happen.

The band pushed (and pushed) on their label to do something with their beloved project until they finally agreed to release “The Way That I’m Wired”  a single which was described by bloggers as ‘a warm, shimmering summer song whose heat-hazed guitars and tales of nocturnal urban wandering are playful yet laced with a tangible hint of melancholy’

Unfortunately, the release was so poorly marketed (and after years of patience) the band were at breaking point.

Olly recalls “We stuck with Rinse for a three year period, throughout most of which we were left to rot on the shelf (bar one great tour supporting The Enemy and a half baked single release that wasn’t marketed properly.) We finally walked from Rinse in November 2014, it concluded a fun but undeniably tough 13 years in music for the 4 of us and in the fallout of the record deal not working out, Luke and Brick decided it was time to leave States of Emotion and move on with their lives. We prematurely announced States of Emotion was over before Bonzai and I retreated to the rehearsal studio we know as home (The White Room, Rainham, Essex) and followed our intuition in continuing to work on the album that never got released, Black and White to Gold. The new songs we wrote to add to the old crop soundtracked our mixed emotions about two of our band mates leaving and our anger towards the label that had neglected us, but through States of Emotion’s rock bottom, we found liberation. Inspired by indie label movements like Funk Volume, 2 Tone and Dischord, some good friends and I formed our very own independent record label Label White Room in hope to start putting unsung guitar music on the map, one small step at a time. Naturally, we are pleased to announce that “Black & White To Gold” the debut album by States of Emotion is finally getting it’s release on Monday, 15th February 2016 through Label White Room. We quite simply just couldn’t let all these songs (or our band name for that matter) go, we strongly feel that this record needs it’s day in the sun. We will spend the forthcoming months servicing the album and playing shows with our new live band.”

As a taster for the 15/02/16 release of “Black & White To Gold” States of Emotion will release a free 5 track EP via Noisetrade titled Rag n Bone Men on 11/01/16. Title track “Rag n Bone Men” is accompanied with an eerily raw video (directed by Martin Craswell) which features both Olly & Bonzai being kidnapped by a group of ghoulish henchmen in a somewhat bizarre homage to Shane Meadow’s “This Is England” and 2008 horror flick “The Strangers.”

Describing the video Olly states “There’s a metaphor (amongst all the twisted visuals) that the ghoulish henchmen of whom kidnap Bonzai and I, represent the negative individuals we’ve jumped into bed with along the way in our music career and furthermore what an unfortunate grip they’ve had on us at various points in our lives, we break free of the shackles in the end and I think it makes for a compellingly positive crescendo in which we ultimately end up back in the driving seat of our own destiny”