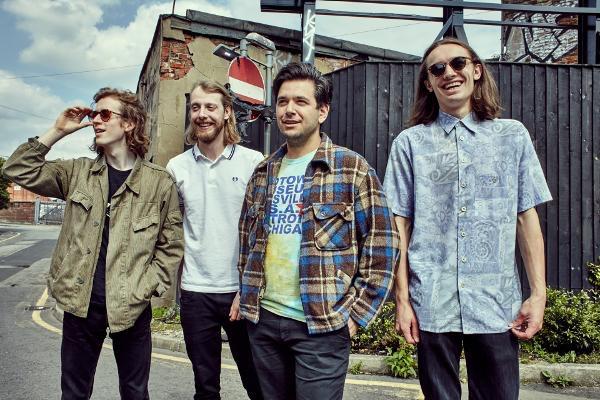 Manchester based garage-pop four-piece Spring King announce the release of new single “Detroit”. Taken from their debut album Tell Me If You Like To, the track is a breakneck paced, fuzz-pop singalong. A live favourite, “Detroit” is described by the band as “a song of lost love” and follows previous single ‘The Summer’.

Spring King received plenty of positive feedback for their debut album Tell Me If You Like To, released in June of this year by Island records. Produced and recorded entirely by frontman – and drummer – Tarek Musa between his self-made studio in Manchester and The Chapel in Lincolnshire before signing to Island, the album fizzes with vibrant urgency. Combining Beach Boys influenced with the fiery energy of The Black Lips and At The Drive-In, as well as melodic touches inspired by samba and bossa nova.

After a TV debut on Later With Jools Holland earlier this year, Spring King returned to the BBC studios for their inaugural Live Lounge appearance. As well as performing previous single ‘The Summer’, they played their spirited and raw Ramones-esque interpretation of Adele’s ‘Send My Love (To Your New Lover)’.

The band recently returned from their first tour of Australia, including a performance at Splendour In The Grass Festival. This followed live stints alongside the likes of Courtney Barnett, Protomartyr and Wolf Alice. They continue to perform at festivals across the country throughout the summer, before embarking on their biggest headline tour to date in October, finishing at London’s KOKO on October 28th.