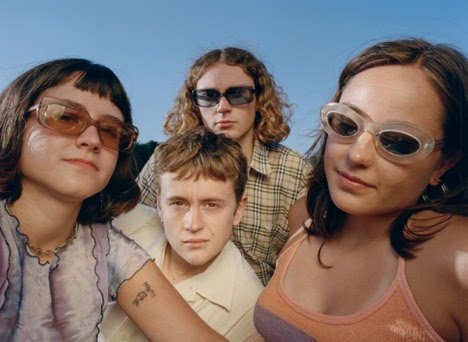 The Orielles have shared their new single “Space Samba (Disco Volador Theme)”. After announcing their new album Disco Volador will drop on February 28th via Heavenly Recordings. The UK quartet play this march at SXSW, along with stops at Treefort, New Colossus, and more

Speaking about the track, the band comment: “Space Samba is a song about corporeal experience, something which we feel we are collectively losing sight of in an age of mental existentialism! It is the ‘Disco Volador’ theme because it relates to the phenomenological thread of the whole album, which tackles the many interpretations of the title throughout. In this instance, it refers to Disco Volador’s literal translation of ‘flying disc’ or ‘frisbee’, using this symbol to reflect both feelings of flight and motion and the notion of human connectivity.”

It’s literal interpretation from Spanish means flying disc but everyone experiences things differently. Disco Volador could be a frisbee, a UFO, an alien nightclub or how you feel when you fly; what happens to your body physically or that euphoric buzz from a great party,” suggests bassist and singer, Esme. “But it is an album of escape; if I went to space, I might not come back.”

The album was written and recorded in just 12 months, returning to Stockport’s Eve studios with keysman Alex now adding texture through his classically trained know-how, they re-joined engineer Joel, and producer Marta Salogni (Liars, Björk, The Moonlandingz) who worked on their debut