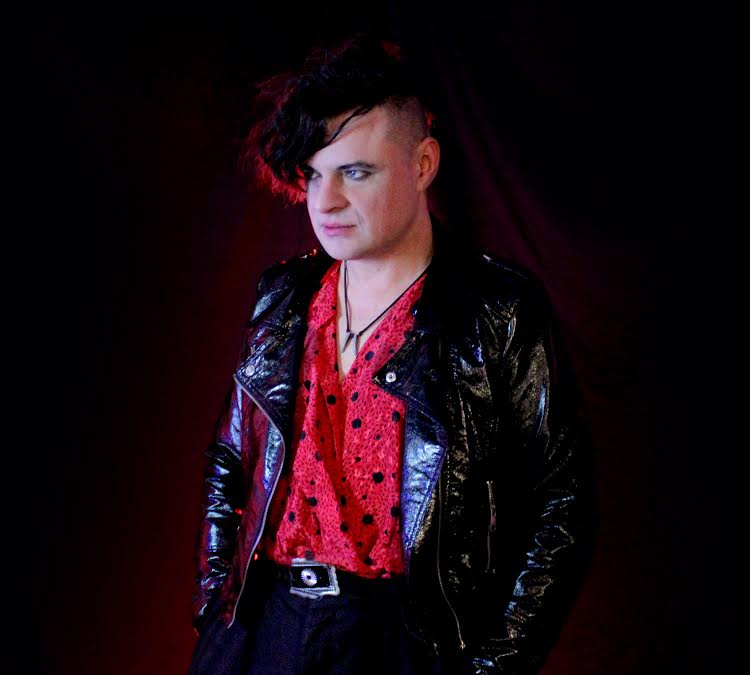 Jack Duckworth is a synth-driven journeyman who has delivered leftfield sounds across multiple projects over the past 25 years. For the past decade, he’s developed a sizeable, sinewave-forward solo catalogue as Soft Riot.

His latest release, Chin Up, is a spacious, at times eerily ambient companion piece to the comparatively straight-forward synth-pop of last fall’s When Push Comes to Shove. It’s a record than channels the “grey ennui” of everyday life, as Duckworth tells Northern Transmissions, but the sounds of his outstretched synth tones and minimalist drones alternate between comforting (“Laughter Takes Off the Edge”, “Grass Through Cement”) and disquieting (“All You Good People”, “Chin Up”). And while he describes the record as a more introverted form of Soft Riot, the record is oddly his most communal, benefitting from guest vocal turns from both Croatian synth artist Iv/An and Augsburg, Germany’s Adam Usi.

Duckworth spoke with Northern Transmissions from his current home in Glasgow, discussing a recent stretch of Covid-19-realated concert cancelations, releasing new music through his Possession Records, and how ambient music is keeping him Zen through these confusing times. This interview has been edited and condensed.

Northern Transmissions: How are things in Glasgow?

Jack Duckworth: Actually, it’s been pretty busy. I had been in Berlin in the middle of March— I was supposed to go on tour but all the shows got cancelled. I had the instinct to just get the first flight back. I’ve [since] been really busy with design development work and video editing, and home life’s good. I’ve been in a good position, but obviously a lot of people aren’t, and I’m totally aware of that. I’m grateful

NT: What happened after you left to play the shows?

JD: Right when I arrived was when the lockdowns and major announcements were being made. The last bunch of shows in Belgium and the Netherlands got cancelled, but there were still a few shows booked in Germany. We were actually driving to Darmstadt to play the first show, but then it got cancelled. We drove back to Berlin and stayed with my friend and booking agent, Annii. I kept a low profile and flew back two or three days later.

NT; What can you tell us about making Chin Up?

JD: I’d had mixed feelings about my last record, [2018’s] The Outsider in the Mirrors. The main thing is that when I was writing that record, I had just moved to Glasgow, and my attention was pulled in many directions. I started writing Chin Up and When Push Comes to Shove in mid-2018, but during the winter I took four months to not do anything else but get in the zone. It’s funny, with Chin Up I came up with the title first.

It’s a total contrast because the record’s moody and zoned-out, with dark bits. When I was writing When Push Comes to Shove, I’d be working on songs for hours, and I’d start getting sick of hearing drum beats, verses and choruses. It’d be 11 pm and I just wanted to fuck around and do something more cerebral and spacey. It was nice jumping from one boat to another and back again. It kept the writing process interesting.

NT: Since you were making the albums at the same time, there’s obviously going to be some ties between the two, but When Push Comes to Shove is more of a traditional Soft Riot album.

JD: In layman’s terms, it’s a synth-pop record, but I have trouble giving myself a genre. I don’t really fall into any particular genre well. Like, I’ll be too synth-pop and quirky for goths, but too experimental for synth-pop, or too out-of-the-box for darkwave. I’m terrible at labelling myself.

NT: What did you get out of working relatively beat-less on Chin Up? “Frost on an Eyelash” has some beats, but…

JD: It does, and so does “Solitary Figures”, but that’s just a kick drum. It was fine for writing, but when I was mixing it, it was quite tricky since you don’t have that ballast of drums, or a bass line that’s got momentum. A lot of [Chin Up’s] parts are minimal. Writing synth-pop, everything mushes together, [but] when you’re mixing a record where there’s two very skeletal synth drones, you can hear all the detailing more. I had to re-record a lot of stuff, actually. It took more time to produce [than When Push Comes to Shove].

NT: It’s also a much different record than your earlier ambient album, Some More Terror, in that those pieces were more improv-based.

JD: With [Some More Terror], I was like, ‘alright, I’ve got an hour [of free time], let’s bang out a track.’ I didn’t really have any goal with it. Chin Up is taking that idea [creating ambient music], but working on it as I would a proper record.

For me, half of the time I’m listening to ambient soundtrack music [at home]. It goes outside of the human culture-sphere, whereas when you’re working on a synth-pop record, you’re thinking about an audience. How would this work live? Who would book me based on this? For Chin Up, it’s devoid of that. It’s got humanity to it, but it’s more based on nature and mood. I like the idea that it’s beyond those trivialities.

JD: There are a lot off references I’ve made on purpose, whether it’s with the lyrics or musical passages that I’ve used before. While I was writing, I would create a synth line and be like, ‘I think I’ve used that before?’ It’s kind of a faux-pas, but why don’t I just put it in anyway? Some people might notice it, but most won’t. I play around with this idea of déjà vu. I wrote “Laughter Takes Off the Edge” first, and then I started writing “Taking Off the Edge”. I had intentionally decided to [link them]; they’re in the same key, a few of the lines are the same.

NT: Are you also circling around themes of anxiety throughout Soft Riot releases, whether it’s singing about taking off the edge, or the infomercial-style clip you made around Voidamol [a fictional anti- anxiety medicine]?

JD: The original concept for writing [Chin Up] was based on this grey ennui, this monotony of not interacting with but constantly having to deal with life. It was a way to therapeutically express that. I started with this palette—this grey feeling— but then I coloured it up. I sequenced the record in four movements; the last three tracks are more meditative [because] I didn’t want to end on a dour note. I tried to make it Zen and reflective, taking it away from the anxiety earlier on the record.

NT: You’d mentioned soundtracks earlier. Some More Terror was more explicitly produced in that vein, as an instrumental film score.

JD: That was pretty much based on my idea of how a film score works. Chin Up has more vocals, and songs could almost be pop songs, especially a track like ‘Solitary Figures’ with Iv/An, who is a great vocalist. I was happy to get him involved.

NT: There hadn’t been much in the way of collaboration on earlier Soft Riot records. Why did you open it up to bring in Iv/An?

JD: We’ve been friends for years. Most of it has been over the internet, since he lives in Croatia, but I’ve met him in Vienna a number of times; I played in Croatia a couple of years ago and hung out with him there. We like each other’s music and we’re always passing ideas back and forth, and I’ve contributed to some of his tracks. For this record, I had this idea of adding different vocalizations that would add some variety. I approached a number of people, but Iv/An and Adam Usi were the people I felt most comfortable with, on a personal basis. I knew that they would be up for it.

NT: How did their vocals colour Chin Up in a way that you couldn’t?

JD: My vocal style isn’t necessarily a pretty vocal style, but I’ve never been attracted to this idea of ‘this song isn’t good, because they don’t have a great vocalist’. A lot of my favourite vocalists are terrible, technically, but they have character. Iv/An has more of a soaring, attractive style that I wouldn’t do myself, but I felt it would fit on that track.

NT: You often post about old movies on your Instagram. Has the visual aesthetic of sci-fi impacted Soft Riot’s music?

JD: I think it did more so when I first started. My first few records have a sci-fi influence, but the later ones are getting more abstract and personal. I was making more a conscious decision [then] to do more narrative lyrics. Back in Radio Berlin [the Vancouver-based post-punk group formed in the late ‘90s], my lyrics were more abstract. I’ve been going back to that style. It seems more natural to me. I didn’t want to force something like, ‘I want to write a song about a guy who goes into a spaceship!’ I mean…there is a song on When Push Comes to Shove that’s about an alien who comes to earth [“By the Skin of Your Teeth”], but that’s the only one I’ve done [lately].

NT: How does it feel to release an album during the pandemic? It’s a weird time to drop new music.

JD: I was planning on releasing it around this time, anyways. I just scaled the release back, because everything is such a big question mark. [Chin Up]’s too long to put onto vinyl, and I’m not the kind of artist that can warrant putting out a double LP on a label that I run [myself]. It’s a weird record, let’s just do a limited CD and cassette run. People are picking it up; I’m getting it to the distributors. It felt like the right record to put out at this time, because it’s the kind of thing that I’d want to listen to. I just want to calm down, Zen out, and take a deep breath.

NT: Is there anything else coming up?

JD: One thing that has picked up a lot in the last year is that my friend Sharon and I are doing video production. We did a video for She Past Away that just came out, and we’re working on another one that I’m hoping we finish up soon.

NT: Is there anything else coming up through Possession Records?

JD: I want to work with other artists, because I don’t want to just keep putting out my own fucking records. It just looks weird! But I put on a different personality when I’m Jack from Possession than when I’m Jack from Soft Riot.

NT: Do you put on a different voice?

JD: I should! I should sound like I’m chomping down on a big cigar.

Soft Riot’s Chin Up and When Push Comes to Shove are out now through Jack Duckworth’s PossessionRecords.