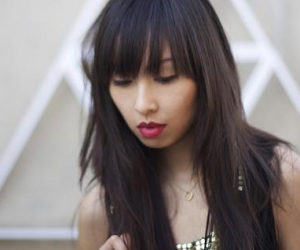 Following the release of the band’s Light Eyes EP, Los Angeles’ SISU is happy to announce the release of their debut full-length record, Blood Tears. Written entirely by by SISU’s principle songwriter Sandra Vu (Dum Dum Girls), the record is slated for release September 17th via New York’s Mono Prism Records. Listen to the band’s driving debut single “Return the Favor” here. The band is also heading out on tour this fall with Montreal’s Dirty Beaches. Full tour dates below.

A marked shift from her work with The Dum Dum Girls, SISU is Sandra Vu’s pet project, a DIY labor of love that found Vu handing everything from songwriting to mic placement during recording. “I sampled a glass water cup and a pen on my desk as a rhythm element. The record has these little quirks that comes with molding the songs in an unconventional way, half of it learned and the other half accidental.” Vu said.The end result of this project was the Blood Tears LP, a beautifully dark, hazy debut full-length.

“Blood Tears is about the anxiety of starting over, the hangover of failure, breaking up, insecurities, self doubt, finding a voice, finding that you have a voice, speaking up and singing louder,” Vu says. These running themes combined with a penchant for dreamy, ethereal soundscapes, and a pull towards a minimalist approach often creates the indefinable aesthetic of SISU. “I didn’t want to sound like any one thing — a shoegaze band, an electronic band, a rock band — but I did want to make pop songs with un-pop sounds,” she explains. “Whether a song starts out as noise or with an abrasive synth, I always find my way back to melody and structure.”

The album opens with the slow burn of “Counting Stars,” a smoldering opening track builds itself up and breaks down multiple times over the track’s run time. The song is quickly followed up by the driving catchiness of “Cut Me Off” and the explosive catharsis of “Harpoons,” long live staples at SISU shows. The album also features dark synth dirges like “Sharp Teeth” and “Sinking Feeling” and hazy, shoegazing masterpieces like “Let Go” and “Blood Tears.” All of this comes together to for a strikingly powerful debut full-length from one of Los Angeles’ most exciting bands.