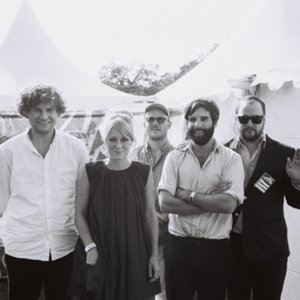 To celebrate the start of their North American tour dates, Shout Out Louds and Merge Records have released the Prins Thomas Diskomiks remix of their infectious single “Illusions”. The cross continent tour kicks off tonight in Washington, DC at 9:30 Club, and sees the Swedish five piece visiting Canada and the United States west coast before heading south for Mexico City. The band are on tour in support of their new album Optica, which The Onion deemed “grand and modern” and a “testament to the songwriting acumen of frontman Adam Olenius.” Upcoming tour dates below.

Optica is the band’s fourth full-length release and marks 10 years since Shout Out Louds released their debut. Following their 2010 album Work, the band (Adam Olenius – lead vocals; Bebban Stenborg – keyboards; Ted Malmros – bass; Carl von Arbin – guitar; and Eric Edman – drums) headed out on tour ever and returned home to their own pursuits. Families were expanded, side projects were launched and homes outside of Stockholm were explored. When the time came to work on another Shout Out Louds record they wanted to return to the playful spirit that first brought them together 10 years ago.

Shout Out Louds took their time with these songs, recording for about one-and-a-half years in a small Stockholm studio and producing themselves for the first time with help from Johannes Berglund. A theme emerged and Optica was born, an album celebrating color and light from a band confident in its sound, filled with real strings, trombones, trumpets and flutes.