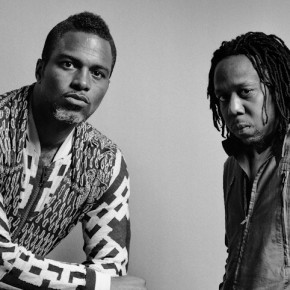 Shabazz Palaces has premiered a new music video today for the song “An Echo from the Hosts that Profess Infinitum,” from their critically acclaimed 2011 record, Black Up, which was directed by Joris Grelet.

Shabazz Palaces also have a slew of upcoming shows, beginning on June 21st for a 10 date SE Asian run with NW festival appearances to follow. On July 13th the group will perform at Sub Pop’s 25th anniversary concert, The Silver Jubilee weekend in Seattle’s Georgetown neighborhood. For a full linup please visit: http://silverjubilee.subpop.com/info

Other festival appearances include: Pickathon Music festival on Aug 2nd-4th as well as this years Doe Bay Festival on Orcas Island.

Shabazz Palaces have kept very busy in 2013. They recently premiered a mini film for (Sparkles)…Recollections of the Wraith, directed by Maikoiyo Alley-Barnes of The Black Constellation collective. The film is part of a thirteen part adornment, performance and object based ritual that began in the fall of 2010 dedicated to transitioned science fiction writer Octavia E. Butler. The video was initially shown as a large scale projection on a continuous loop for four months as an installation during the Frye Art Museums “Moment Magnitude Art Exhibition”. Shabazz Palaces also toured with label mates THEESatisfaction and The Helio Sequence (who they exchanged remixes with). Shabazz Palaces are currently at work on the follow-up to Black Up.