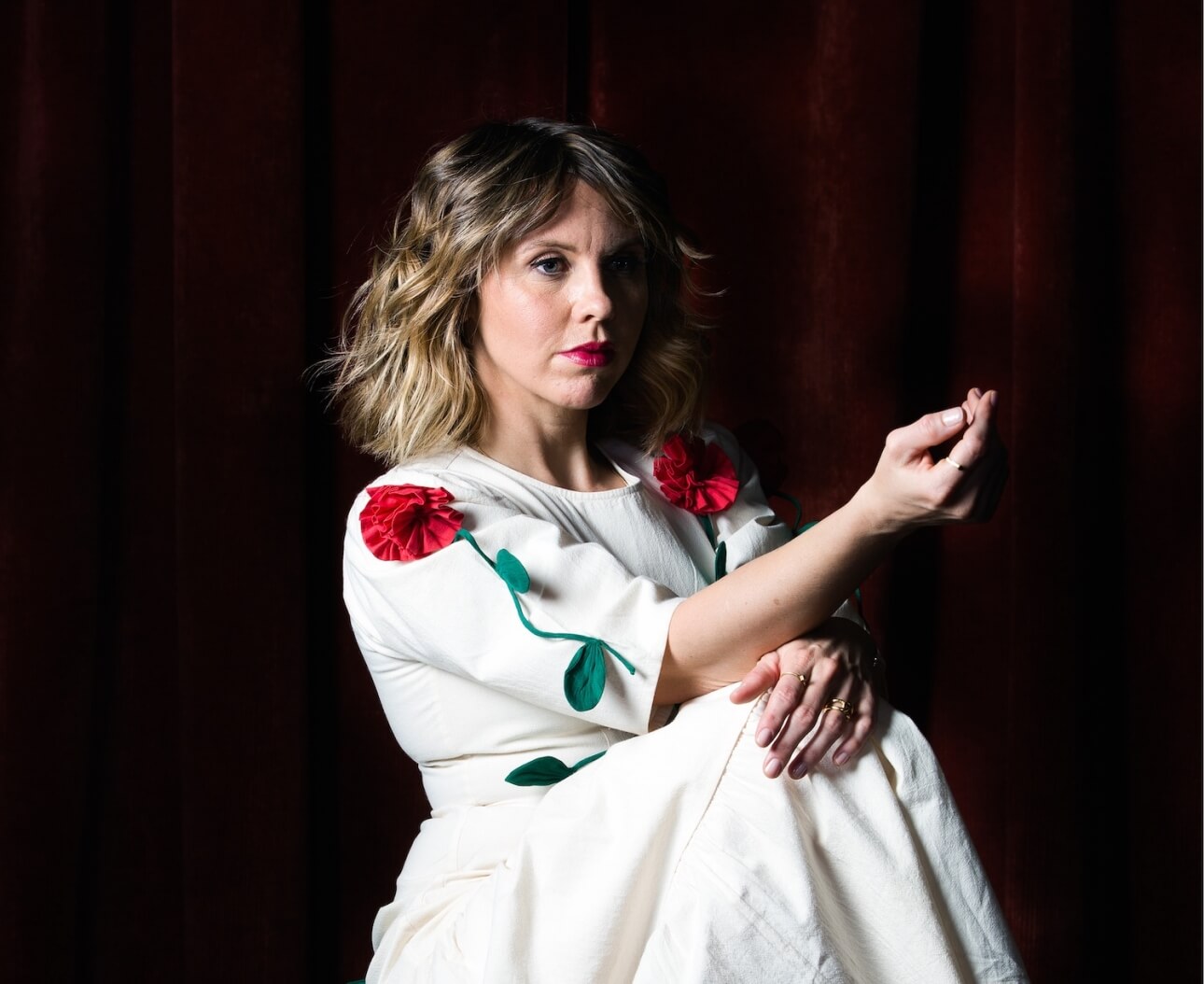 Detritus presents the evolution of composer/violinist Sarah Neufeld in many ways. Compositionally, you can sense this via the album’s ebb and flow from sustained, emotive bowing and synth-immersive drones (“The Stories”), towards lively, mercurial string arpeggios (“The Top”), towards the rumble of drum-accompanied expulsions of sound (“Tumble Down the Undecided”).

The seven-song suite itself is the next phase of Neufeld’s who we are in the dark collaboration with choreographer Peggy Baker, the pair and a team of dancers having staged this extended proto-version of Detritus live throughout 2019. While primarily honing in on Neufeld’s expressive string work, the new album adds performances from fellow Arcade Fire/Bell Orchestre member Jeremy Gara on drums and synth, Bell Orchestre brass player Pietro Amato, and flautist/saxophonist Stuart Bogie.

Through the recent video for “The Top,” filmed in Brooklyn earlier this year while Neufeld was eight months pregnant, the artist gracefully comingles music and movement, offering a mix of improvised and choreographed steps—with or without a violin in her hands— before lingering on an emotionally-loaded stillness.

Speaking with Northern Transmissions, Neufeld got into the development of Detritus, interpreting the sounds of a “silent partner”, and how movement has always had a hand in her art—most obviously through Detritus, but likewise through her work as a member of Bell Orchestre and Arcade Fire.

Northern Transmissions: Detritus is an album that comes off of a previous collaboration with Peggy Baker. How did you come to the decision to put together this next, fully integrated body of work together?

Sarah Neufeld: So Peggy and I were paired up to perform in 2015, at Fall for Dance North in Toronto. She choreographed something to a piece of mine from The Ridge [Neufeld’s previous solo LP], and I added onto it. The piece— it’s called “From Our Animal”— hits really fast. It’s intense—vigorous— so she asked me to compose something as a prelude, a sung piece. It opened with the lyric, “who we are in the dark.” She gravitated towards that as a concept and theme, and decided to use that as a jumping off point for her next full-length project with her company, which at the time was seven dancers. She had also asked me compose a live soundtrack. We launched into the idea of doing that together, and explored themes around darkness, identity, intimacy, loss, and grief. Just about everything you can think of when you hear the phrase “who we are in the dark.” We started in earnest in early 2018. She had already begun choreographing without music, so when I arrived at the Banff Centre in early 2018, I got to witness where the movement was. I got to respond to it, and that’s how I began to compose almost the whole body of work on Detritus.

I loved having the opportunity to compose, being given the visual information in its live, raw, early form. Being in the room with dancers is something I’ve always enjoyed doing. Bell Orchestre, another group of mine, actually composed all of our early stuff improvising in a room with contemporary dancers. I got to have this same kind of experience, but at this point as a solo composer. I spent a long time, of course, composing each movement or piece on the album. I’d say there was another 20 minutes or so of material that’s not on Detritus; that was solely for the live soundtrack. There was more ambiance, noise, improv, and drum work. It was a big project. I’m grateful that [Detritus] puts the cap on it. It gets to become immortalized…

NT: Compositionally, what kind of things do you consider as you’re being presented with that visual information—the movement of these dancers—as opposed to working off of other musicians, like in Bell Orchestre?

SN: I really like responding to movement. It’s this silent partner, but movement can dictate a lot of things. It can dictate tone and feeling, it can dictate pace; Energy or silence. All sorts of things. If I’m going to play with a group of people, responding to auditory signals of music, I’m going to respond differently than were I to respond to something visual. Also, something visual that’s changing. It’s not a painting; it’s not something as repeatable as, say, scoring a film. It’s very human, tangible…[and] it’s kind of easy to feel whether something is right or not when you’re doing it that way. I knew immediately if something was right, just through the way I could see it resonate with the dancers or Peggy. I could see when something would land.

NT: You have a background in dance, right? Do you sense an innate connection with the medium, having grown up involved with dance in some form?

SN: Yes. I spent a lot of my youth in dance studios, for sure, but I never considered myself a serious dancer. I wasn’t trying to go down the career route, but movement has always informed who I am and how I play…and probably what I play as well. It’s all tied in to my work, just the physicality of it. I’m really drawn to working with dance. Its home, you know? I’m inspired by it.

NT: How has your own relationship with movement evolved since going through the process of making who we are in the dark and Detritus. You’re dancing in the video for “The Top,” for instance…there’s this navigation of the physical self in this transformative state, which you’re no longer in. It’s this unique performance…

SN: I spoke with Peggy about it, and she coached me in terms of how to think about what I was going to do. At the same time, I was committed to going with the moment. I did work on different aspects of the piece: how they landed with my body, what kinds of movement vocabulary felt natural. In the end, I just went with the energy of the moment, and the adrenaline of the day—Shooting all day, very pregnant like that.

I think the movement part was one of the most fun aspects of the day. I experienced this really bizarre, acute carpal tunnel syndrome during my pregnancy where my hands were numb—paralyzed—and experiencing a lot of pain. It was hard for me to play; I had an ice bucket. Because I was performing for real—you know, the audio you hear in the video is the recording, but the video was made live with me playing along—there was a lot of adrenaline, and a lot of, “Can pull this off? What’s this going to look like since I’m eight months pregnant?”

I also had to sort of lean into the fact that I move a lot when I play— sometimes less so as a soloist, because what I’m doing is so involved and technical. Lately, I’ve been playing bass pedals with my feet, so I’m not cutting loose, but with Arcade Fire it’s something I do a lot. Over the past 20 years, I’ve become a person who really uses their body in a dance-y way while performing. It was like, you know, “I’ve got this…belly or no belly” [laughs].

[“The Top” is] an intense piece, an emotional piece. It’s fraught, so I let myself go into those darker places, using the most painful moments of my own experiences over the years. You watch the scene at the end, while I’m seated, and as the camera zooms in, you see that I’m tearing up. I had to go into a real process for that —good thing pregnancy lends itself really well to tears [laughs]. It was pretty smooth conjuring up that finale of tears. I guess, to answer your question, I felt at home doing all that, and tried not to think about it too much in terms of, “oh my god, do I look strange?” Any of those kinds of questions that would have limited my enjoyment of the experience

NT: Detritus is a record inspired by the who we are in the dark collaborations, but for many of us, the material will first be presented to us aurally, as an album separated from the choreography. Without half of the equation there—that visual stimulation—what can you say about the music standing on its own two legs?

SN: I wrote the music to stand on its own two legs, and it does. Compositionally speaking, they’re songs. That’s also why the other 20 minutes isn’t on the album, because that was more like soundtrack work. I was writing an album within a soundtrack from the outset.

NT: Are there any plans to put together a fully immersive livestream around Detritus, with both music and movement?

SN: I would say that the dance portion of the experience has come to an end. We toured who we are in the dark for a year—not solid, but we did a lot of performing. So when I perform this music [in the future], it will probably be as a soloist. [But] So much is going on in my life that I’m just keeping my head above water. I mean, I can’t wait [to perform], but I don’t know…2022? Is that when people are touring? I’m just excited that I might get to see my family some day. I would like to [tour], but it’s all happening slowly, slowly, slowly.