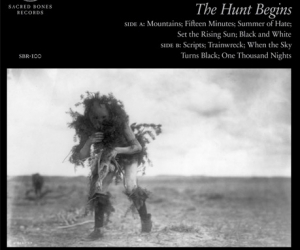 Sacred Bones Records is celebrating 100 releases by unveiling the lost LP from The Hunt, The Hunt Begins.

The first ever release on Sacred Bones was a 7″ from The Hunt. The band was formed by Jasper McGandy & Christian Kount (both now members of Cult of Youth) in 2007. They crafted a unique style of post-punk influenced by The Southern Death Cult and New Model Army. The artwork for their first release depicted an androgynous wild banshee wearing warpaint, clad all in leather and animal bones, holding a sacrificial knife pointed at the sky. This debut single was The Hunt’s lone statement.

The Hunt played tons of shows including some of the first Wierd Records parties at Home Sweet Home in NYC, they did a few short tours and in then 2009 after multiple tumultuous attempts at recording a full length The Hunt decamped to their collective hometown, Boston, to record the ultimate document of their time on earth. Buses begat buses, couches begat couches, and slowly the songs began to come together as they should have all these passing years. On the edge of perfection their time was cut short and they disbanded. Leaving this document shelved for years.

Now, four years after it was recorded & shelved, The Hunt Begins will finally see the light of day in honor of both the first and one hundredth release on Sacred Bones Records, we will finally see and hear the toils of New York’s most enigmatic post punk band of recent.

The Hunt will play one final show in celebration of the release of “The Hunt Begins” on November 20th at Home Sweet Home in NYC for the Nothing Changes party.