Ron Gallo has kept busy these past few years, releasing two records and an EP since 2017. With his constant writing, a backlog and the quirky attitude to make it all work, Gallo has made a habit of making serious topics fun to hear about. We caught up with Gallo ahead of his North American tour to talk about his new record Stardust Birthday Party, why he messes with audiences and how Gallo keeps putting out albums so fast.

Northern Transmissions: How did the idea of speculation versus reality inspire you on “Always Elsewhere” and how did you want to represent that feeling?

Ron Gallo: Sonically the song is quite anxious and frenetic, which to me is a direct result of not being in the present moment. So much of anxiety comes from things that haven’t happened yet. The song is addressing that no one is ever really where they actually are, which is a weird predicament that humans find themselves in almost all the time. So many people are on their phone and not aware of what’s around them, or they’re experiencing things through the mind or a secondary source instead of an objective reality. It’s a plea to be aware that you’re not present in the moment physically, and that’s a cool way to get into the moment, which is really a great place to be. Being there is a doorway to peace really.

NT: I was also interested to hear about how introspection and having to reflect on yourself during hard times influenced your writing on Stardust Birthday Party?

RG: The first record, Heavy Meta, was written during a time where I was really just frustrated with my life and the world around me. I was very outward looking and blaming everything else for how I was feeling. Then a series of life occurrences just forced me to go inward. I was in a relationship in Philadelphia with a girl struggling with drug and alcohol issues, it was super intense to deal with someone struggling with that. The relationship crumbled and she moved to a healing community to deal with those issues. After no contact for a year, she sent me a letter and it was mind-blowing. It was clear that something had deeply transformed and she sounded like a different person even. It got me very intrigued because I was dealing with my own things and this person who was on their deathbed is now in a much better place. We started talking and sharing more, and it got me on this inward path. I’ve reassessed everything I thought I knew about the world and how I treat people. The record stemmed from that because it’s the most honest thing I can talk about and with how outward looking the world is, everyone is really concerned. This record is about bettering yourself so you can better other people and really approach the world with more love and compassion, which is really lacking right now.

NT: Speaking of which, this is your second album of the year already with your last LP in 2017 as well, so what drove you to write and release this album so quickly?

RG: I’m definitely someone who writes constantly, rather than just writing in the studio for one record. When it comes time to write a record, there’s a bunch of songs that already exist and you just piece them together. Some of the song’s on my debut are five years old, and I sat on that for a while. With the Nice Guys EP it was the most carefree approach to writing that I’d ever done. It was so liberating because it was kind of this joke album and there was no standard to be met. Those songs just flew out all at one time and we didn’t over-think it. Stardust Birthday Party is all songs I’ve written over the past two years and we just recorded 15 tracks, and cut it down to the 12 that thematically worked together.

NT: Where did your habit of reading of speeches from paper and leading crowds through chants between songs come about?

RG: That stuff is important to me because we’re not really a band that’s interested in making it about us necessarily. We want to play our songs while breaking that wall between the audience and band, while also toying with people’s sense of reality and fucking with them a bit. Our songs are rooted in pretty serious topics but we are total idiots, and we’re not serious people at all. The best way for us to address this is to bring a sense of humour to it. It also makes it more digestible for me to fuck around a bit instead of insisting how serious our music is. We care about human beings and want to encourage people to be weird. You can see a band play whenever you want so I feel there should be more to it. It becomes self-entertainment too.

NT: How did you want to observe being alone for the Do You Love Your Company” video, and how did that video come about?

RG: It’s about you and addressing yourself when there’s no one else around, and that’s when things come out. It’s also a simulation of my attempts at meditation over the past few years. The video takes place in a black void, which is the self and there’s all the voices. There’s the mind and all these versions of you that converse in a constant way. It’s about self-inquiry and the you that exists inside yourself, and creating a very real version of that. 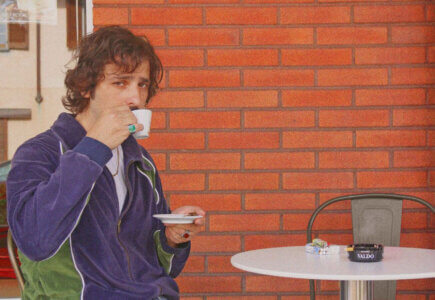