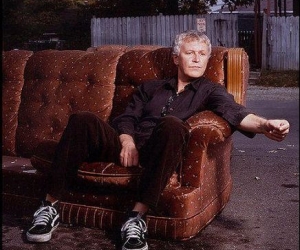 Honey Locust Honky Tonk is a compact wonder and so varied. Slicker in some ways than recent Guided By Voices efforts, though not without its own down-home charm, its seventeen songs still whiz by in 34 minutes, stridently showcasing a multitude of Pollard’s songwriting.

The longest, the semi-stately album closer “Airs,” clocks in at just over three and a half minutes, but most are in the two or two and half minute range typical of Pollard’s writing. “I’m not afraid to be immature, to make a fool of myself,” he recently offered as a reason why he’s been able to continue writing music at such a high level for so long. “I’m not afraid to look insane.” The only thing crazy about a song like “It Disappears In The Least Likely Hands (We May Never Not Know)” is its slightly loopy title.

For any other guy whose reunited band has just finished putting out four full albums and an EP in eighteen months, the release of yet still again another solo album might seem excessive, to say the least, For example, The four song run that begins with “Suit Minus the Middle” and concludes with “She Hides in Black” not only includes object lessons in Pollard’s life-long obsession with what he calls the “four Ps: pop, punk, psych and prog,” but long-time-fans will also be rewarded with a reference to a beloved character from early solo effort Kid Marine.