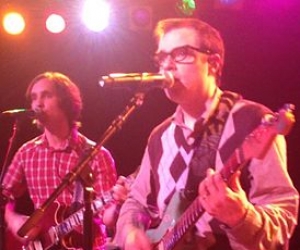 Hailing from Chicago, Scott Murphy was a founding member of the pop-punk four-piece Allister, which formed in 1996 and was one of the first bands to sign to Drive-Thru Records. Over their decade and a half long career the band has released five albums, including 1999’s Dead Ends and Girlfriends, 2002’s Last Stop Suburbia, 2005’s Before the Blackout, 2010’s Countdown to Nowhere and 2012’s Life Behind Machines.

Murphy became intrigued by Japanese culture while on tour there with Allister in 2001 and vowed to study and learn the language by the band’s next tour of the country. Keeping his promise, by 2006 he was fluent in the language and the band was invited on a two and a half month long tour with the popular Japanese band Ellegarden. His dedication to the language and culture led to the band recording an album of Japanese and English cover songs titled Guilty Pleasures in 2006, on which Murphy sang half of the songs in Japanese.

It’s no secret that Weezer’s beloved singer Rivers Cuomo has a deep affinity for Japanese culture. It’s peppered throughout Weezer’s lyrics and after marrying a Japanese woman in 2006, he began studying her native tongue to better communicate with her and her family.

At the same time, Murphy found success in Japan selling over 250,000 copies of Guilty Pleasures which led to his eventual signing with Universal Music Japan where he released one platinum and three gold solo records over the next few years.

While on a Japanese tour with Weezer in 2009, Cuomo happened to hear one of Murphy’s records. That chance moment led to an arranged meeting in Los Angeles later that year. Cuomo had been thinking of putting out an album in Japanese but was still in the early stages of learning the language and wanted to ask Murphy for advice.

Over the next several years, as Cuomo mastered the language, the two became close friends and began writing and recording music in Los Angeles and Chicago, and eventually finished the album in early 2013. Scott & Rivers was released on March 20th through Universal Music Japan

“I grew up listening to Weezer, so at first it was a little surreal to be working on a record with Rivers,” says Murphy. “The album is kind of all over the board. There are some pop songs, Weezer style rock songs, acoustic songs, even a few synth heavy tracks. We were worried at first that it might not make a cohesive record, but after listening to the finished album I think we were both just really proud of the work as a whole. It’ll definitely be hard for non-Japanese audiences to remember the lyrics to these songs, but the melodies are simple and catchy… if anything I think this record shows that the language of music is universal.”

Murphy joined Rivers on stage for the first time at a Weezer show in Los Angeles where the two surprised fans with a performance of one of their songs. He joined Cuomo again on stage during Weezer’s last tour of Japan where the duo performed their first single “Homely Girl” for packed venues. “Between that and playing a few Weezer songs in the encore of Scott & Rivers live show, sometimes the fan in me geeks out a bit.” Murphy adds.