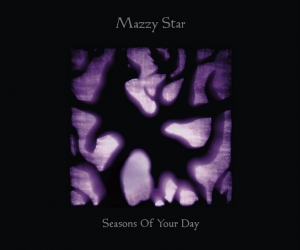 Rhymes Of An Hour

Seasons of Your Day

Seasons of Your Day is the first album by Mazzy Star in seventeen years. However they never fully took a break since the album was recorded sporadically between 1997 and 2012 in California, Norway and London. With such an on again off again approach I couldn’t help but wonder if Mazzy Star’s new album would be a festival of hits and misses. Gladly, the album is nothing but one solid song after another resulting in what might possibly be the band’s strongest album to date.

“In The Kingdom” starts the album off with church organ chords until David Roback’s opiate-warm guitar-playing swirls around you while Hope Sandoval’s dreamy vocals drift out of your speakers letting you know that Mazzy Star has left off right where Among My Swan ended.

“California”, the band’s first single and second cut on the album, is my least favorite. I’m not saying it’s at all bad, but it just seems to drag on a hair too long. Also it’s surrounded by so many other superior tunes that it just seemed to stand out as a wee bit of a lesser.

“I’ve Gotta Stop”, “Seasons of Your Day”, “Common Burn”, and “Sparrow” hold onto that classic Mazzy Star sound, while songs like “Flying Low” and “Sparrow” change up the tone with a nice country influence.

The album smolders to an end with the bluesy “Lay Myself Down”, which had me nodding my head and stomping my foot along with Keith Mitchell’s drums. When the song was over I thought to myself: that’s a great Mazzy Star album. They didn’t change it up, screw with the sound, or experiment in some crazy direction. They kept it just as everyone likes it… pure Mazzy Star.