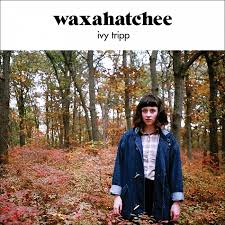 As the audience of Waxahatchee has grown over the years, her music has become more ambitious, with her lo-fi acoustic origins being replaced by cleaner-sounding recordings and full-band arrangements. Songwriter Katie Crutchfield’s third album with the project, Ivy Tripp, continues this progression: there are grungy rockers, a few sparse ballads, and even a couple of electronic-inspired numbers performed on keyboards.

At its core, however, Waxahatchee’s appeal remains very simple: these songs are all about forthright lyrical confessions and uninhibited honesty, and the best moments are those when Crutchfield lays her feelings bare.

Waxahatchee’s most striking lyrics aren’t metaphorical or even particularly poetic. Instead, they come across as the kind of unfiltered admissions that a teenager might scrawl in a diary. On the fuzzy opening keyboard ditty “Breathless,” Crutchfield layers her voice with harmonies as she sweetly sings, “You see me how I wish I was” — a line that’s both a touching expression of gratitude and devastatingly self-critical.

This nuanced approach to self-deprecation returns on “<“ and its refrain of “You’re less than me / I am nothing.” The track’s arrangement becomes increasingly layered with jumbled rhythms and quirky, angular riffs, but this is all window-dressing to bolster the key lyric.

The more pop-friendly tunes are pleasant and catchy, but they don’t have quite as much impact as the more stripped-down numbers. “Under a Rock,” “Poison” and “The Dirt” rely heavily on ‘90s alt-rock influences, and while they’re the LP’s most immediately accessible cuts, the muscular arrangements take away somewhat from the nakedness of Crutchfield’s words and delivery.

It’s telling that the collection’s best song is the most similar to her old material: “Summer of Love” is a devastating acoustic ballad laden with lo-fi hiss, and Crutchfield poignantly begins, “I didn’t think, now I’m here / Treading water without you.” This gives way to the bittersweet chorus lyric, “The Summer of Love is a photo of us.” The words don’t give away too much in terms of specific details — there’s just enough to allow the listener to fill in the blanks, giving it a devastating balance of universality and personal intimacy.

This song is so self-exposing that it’s almost embarrassing to listen to (I can just imagine an earnest teenager performing this song at a high school talent show while his or her ex cringes in the audience), but it’s a compelling reminder that there are few things braver than complete emotional vulnerability.