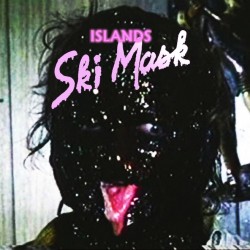 “Islands is Forever” is the mantra of Nick Thorburn’s Islands project (for which he often goes by Nick Diamonds), and the funny thing is, the public may need some reminding of this. Islands has been here the whole time, although the band certainly fell through the cracks, and it is hard to say if Ski Mask, the band’s latest, is going to be enough to propel the band back into favourable light with critics and fans. While it has more than a few charming tracks, there is very little to hold onto here.

After garnering much attention in 2006 with the release of the still-in-hindsight enchanting Return To The Sea, Islands proceeded to play a game of self-implode and re-construct which left many fans feeling alienated or disinterested. The band’s merit lay in Thorburn’s songwriting, and he thankfully still knows how to craft the occasional pop diamond. Thorburn has a way of combining depressing lyrics with incredibly high-energy “la-la-la” moments and lavish, almost goofy instrumentation, and this often pays off.

Album stand-out track “Sad Middle” starts out at a gallop and builds to a frenzied celebration of the same nihilism that provides the seeming red thread for the album as a whole. Death, guns and a healthy dose of self-loathing weigh heavy on Thorburn’s mind throughout, and he does manage to escape cliché on occasion to turn his frustration and anger into something sonically positive on moody, dynamic, calypso-beat “Death Drive” and album opener “Wave Forms.”

The beauty of the Islands project is that when the music starts rolling, it is easy to get carried away in the melodies. There is a flow to the first half of this album, at least, that may be enough to convince listeners that Thorburn still has the gift he showed off in Islands songwriting and his work with the Unicorns. Unfortunately, there are some equally forgettable tracks here, and on tracks like “Nil”, which is a tad too raucous and insincere, it’s clear that Thorburn’s desire to experiment with different genres and sounds is not always to his benefit. Despite the earnest bent of Thorburn’s lyrics, couched in clever lines like “Are you impressed with how depressed I’ve become?”, the vaudevillian piano and heavy-handed snares impair the sentiment.

Permanence is high on the list of Island’s musical goals, which contradicts the fact that much of this album feels very disposable. Thorburn’s idealism and impetus to create something sonically beautiful and unique offer the listener small delights, but it remains to be seen how many of those delights will be of the lasting kind. Of course, not every listener is yearning for forever, and so many will find enough in this album to convince them that “Islands is Good Enough For Now”.