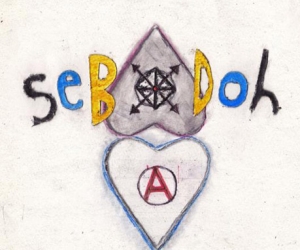 Nobody’s on trial here, right? So the first thing to strike me about “Defend Yourself” was the title. Replace “self” with heart” and you are spot on here. Sebadoh’s first album of new material in almost fifteen years is quite personal. The record is a weapon-and-shield treatise on emotional risk, personal growth, and it is a stirring thing.

There is a nervousness to openers “I Will” and the following “Love You Here”. Both with jittery energy. “I Will”, starts mellow, strummed, then leaps to a pushing guitar and drum mover, the vocal, urgent but held back. “Love You Here” has shuffling rhythm and thick basslines  everywhere pulling hushed ache from Lou Barlow like the person he’s singing to is in the room. No air between notes here, only a precise yearning that would almost seem to fit on an early Toto album.

Then, the hammer comes down. “Beat”, “Defend Yourself” and “Oxygen” feel like battle-songs. A wide as the room bass in “Beat” marches without relent. Kalashinkov snare-hits from the drum kit while guitars soar alongside. Gone is any vocal restraint. Barlow with a megaphone shouts down from up high. All this as if love is hard and relationships are war.  In “Defend Yourself” the drums are still firing, bass back a bit now but still driving. Guitars in front, swirling tones, generating a siren of sorts. A rallying cry and a call to arms.  In “Oxygen”, the band and all its machinery are now in full stride and the song is a runner.  Hopeful,  almost triumphant post-battle, the singing is sinuous here, not shouted.

Now the shimmering chrome of “Once”. For all the jitters and jagged power in earlier tracks the instrumental “Once” veers easily, dives with grace and force — all gleaming curves and muscular control until the song is “sung out” on an exultant organ line at the end.

“Inquiries” is an angular two-step with twangy vocals and an abrupt breakdown that takes over any attempt to joke away the pain in the lyric. It is paired with “State of Mine”. No angles or twang. A straight-up admission of flaws and failures.

“Final Days” is a simple burner on self acceptance that mounts in energy, storms its way out and leaves us “Can’t Depend”. Here the self acceptance seems to bolster the lyric. Barlow’s voice clearer, stronger.

The healing continues in “Let It Out” and “Listen”, two hopeful compositions. “Let It Out” with heart rate tom-toms, gentle cymbal washes, strummed guitar and a delicate vocal laced over it. “Listen”, is spoken quietly as a beat that grows more and more insistent, the song lifting itself up finally to end on a hard guitar riff.

In “Separate”, the album’s closer, the “self” sounds, healed, rejuvenated, emboldened, vigorous once again. An aggressive albeit chastened return. All the better maybe for the difficult lessons of life but with more hard lessons still to learn. As I said, stirring stuff in its entirety and song for song, loaded. There’s plenty to play around with. These guys need to stick around. Maybe they will.