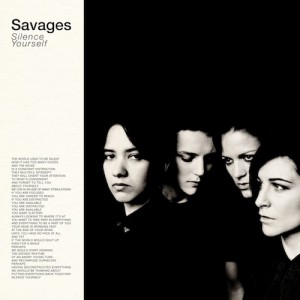 Savages are a no-wave / post-punk outfit that formed in London in the fall of 2011.  They quickly became renowned for their primal, caustic live performances. Their first full-length LP ‘Silence Yourself’ debuts May 6/7, 2013, and the album captures the zeitgeist of volatility pervasive in our culture, most notably represented during the fiery London youth riots that occurred the summer before the band formed. Savages’ music is not political in nature, but in its throttled rhythms, combative and provocative lyrics, and relentless energy, it is a catalytic force of violent discontent.

‘Silence Yourself’ is a skeletal, stark, and discordant album. Slaggy bass lines, serrated guitar riffs, angular arrangements, and the sneering, bristled vocals of Jehnny Beth firmly establish the band in the artful territory of the “post-genre”genre. Standout track “She Will” appears FM-friendly with an intently melodic riff and flashy hi-hat rhythms, but as the song tears along, its menacingly jagged arrangement and astringent vocals reveal a memorable “wolf-in-sheep’s-clothing”moment. On the smouldering “Waiting for a Sign” the brooding bass and searing feedback creates a visceral tension that teeters on neurosis. Album closer “Marshal Dear” offers a nod to the instrumentation of forebears PJ Harvey and Nick Cave, as a discerning piano melody frames the sinewy bass and guitar interplay, replete with a raspy, percussive saxophone.

Savages have carved a niche for themselves but with such levels of explosiveness,the broader “sustainability” question looms on the horizon. The debut album ‘Silence Yourself’ is indicative of their vigour, but ultimately the tracks sound more as a framework for their compelling live performances and less the wholly cohesive work of art that is intended.