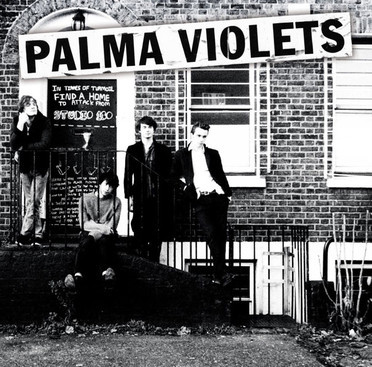 It’s no small wonder that Palma Violets, the pesky four piece from London, are having their debut LP, 180, released on Rough Trade. The record label is home to The Strokes, The Libertines and Howler and with these bands in mind, you should have a good snapshot of what the confectionery themed quartet sound like. Grotty rock ‘n’ roll populates 180 like the dirt on London’s pavements and what better way to kick off their first outing than with the modern classic ‘Best of Friends’. This rollicking indie-punk stormer is what propelled Palma Violets into the public consciousness and captures the band at full tilt with its Clash-esque punk rock swagger. Admittedly no other track on 180 distils the groups raw energy quite like ‘Best of Friends’ and anyone expecting eleven tracks in the song’s blueprint will be sorely disappointed. This isn’t too say Palma Violets lose any impact with ‘Best of Friends’ leading the pack, far from it, the remaining ten nuggets on their debut portray a certain depth and variation to their ramshackle wares.

Palma Violets have gained notoriety with their unpredictable live shows and the magnetism of frontman Sam Fryer (vocals/guitar) and Chilli Jesson (bass/guitar). Both fellas cut a dash as 2013’s take of Pete and Carl from The Libertines, however Intriguingly on 180, sonically it’s Pete Mayhew on keys and Will Doyle on drums that steal the show. The injection of frontloaded drums and woozy organ whirs gives the London scamps an added texture to the usual garage rock set up. Notably ‘All The Garden Birds’ swirls with swathes of organ chimes and ‘Rattlesnake Highway’ has a shambolic slant which is pinned together by the abrasive drumming supplied by Doyle.

180 spins out like you are hanging with the band during the recording sessions, there are little vocal snippets in-between songs and occasionally while a song unravels you can hear howls and inter-band chatter. These little nuances feel like breadcrumb trails into the band’s inner sanctum, kind of like being handed a cassette from a mate’s band, 180 is impressively raw and passionate.

Jesson has proclaimed his love for fellow London band The Clash and this influence is daubed across the more barbed songs on his band’s debut, ‘Johnny Bagga’ Donuts’ is pure Strummer snarl while ‘I Found Love’ possesses one of the best riffs to come from Palma Violet’s primary release. So not to focus on the somewhat predictable, the Londoners can also strip things back and pedal out the sedate ‘Three Stars’ that projects an image of maturity amongst the off-kilter riffs and howls.

The only thing that let’s 180 down is closing track ‘14’, it almost feels like an after thought, it’s eight minute lifespan is perhaps twice the length it should be, plus the tedious “I’ve got a brand new song/S’gonna be a number one” lyrics no matter how ironic, show the band have a little more to learn when it comes to applying humour to their craft.

Hype and the focus on the two lead men aside, 180 sounds likes years of contemporary guitar slingers being merged together and then siphoned out to produce Palma Violets. This may sound like the band are a facsimile of all that has come before them, this isn’t the case but you can hear a fine lineage in every song they make. Here’s hoping they can continue this heritage whilst putting their own spin on rock ‘n’ roll.