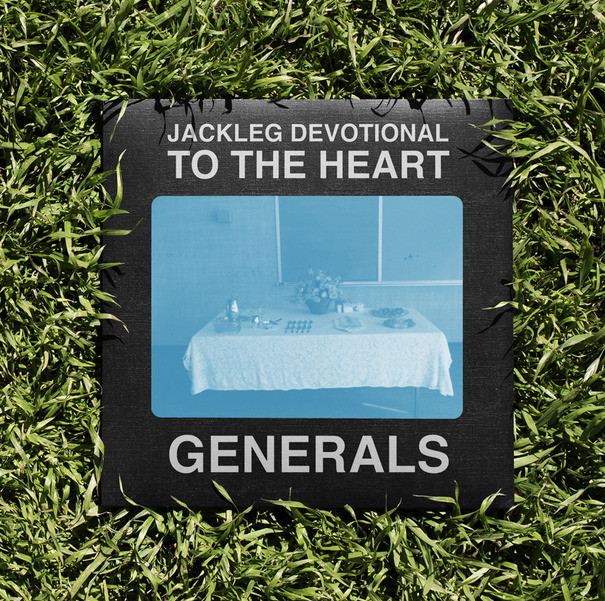 Jackleg Devotional to the Heart

While they’ve been a group since 1998, one can be forgiven for not knowing The Baptist Generals. Jackleg Devotional to the Heart is their sophomore release, and their first in 10 years. The Denton group is a vehicle for main songwriter Chris Flemmons, and a rotating cast of “local, underappreciated experimental-folk heroes”.

Jackleg’s first two songs mislead the listener into expecting a fairly typical upbeat indie-rock experience. Opening instrumental track “Machine En Prolepsis” closely resembles a lost Neutral Milk Hotel track, blown out acoustic guitars and all. Following this is “Dog That Bit You”, which could be a Heroes-era Bowie track as re-imagined by Stephen Malkmus. No complaints to be found here, but these two tracks are not indicative of the sound that shapes the rest of Jackleg. In the press release for the album, Flemmons describes this set of songs as his “love album”, which seems apt given the mellow, voice-and-guitar-only songs that carry the rest of Jackleg. Flemmons isn’t shy about wearing his heart on his sleeve either: lines like “I try to make the shape of you/ you’re such a shadow in my empty arms” are overtly simple, but still manage to feel earnest.

The most interesting elements on Jackleg come in the form of ‘other’ instruments – in particular, the gorgeous string and horn arrangements that appear unexpectedly on album closers “My O My” and “Oblivion Overture”. The arrangements are reminiscent of an era when such arrangements were the norm in popular music, and highlight Flemmons’ strength in borrowing elements from this type of pop classicism that may have been lost on his earlier, stripped down songs. If there are any faults to be found on Jackleg, it’s that many of the earlier songs would further benefit from this lush orchestration, breathing some life into the quieter tracks.