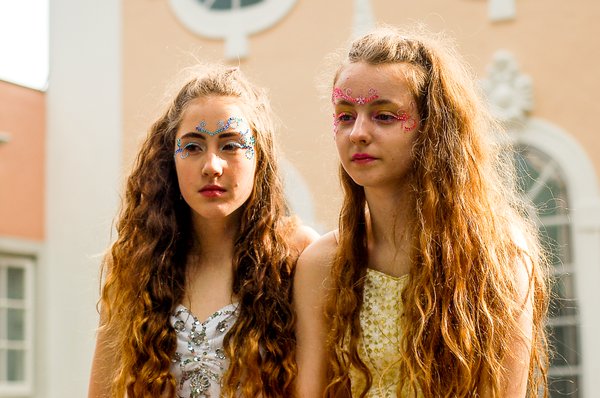 Let’s Eat Grandma have just released their debut album I, Gemini on Transgressive Records. On the heels of their debut release they have announced New York tour dates at Rough Trade and Berlin on September 20th and 21st.

I, Gemini, the debut album from Rosa Walton and Jenny Hollingworth, was recorded in the former nuclear bunker turned analog paradise, Old School Studios in Norwich, under the watchful eye of Will Twynham (HandOf Glory Records).

Let’s Eat Grandma was formed in 2013 when Rosa was given a second hand acoustic guitar for her birthday and Jenny adopted a battered old ukulele. Influenced by playing jazz and classical music both in and out of school and their own desire to explode the pop formula, they started writing a series of uniquely structured compositions. On a month by month basis their repertoire of instruments expanded and expanded to include the saxophone, the piano, mandolin, drums, synthesizers, harmonica, recorders and whistles, even if their audience initially was only each other.

“Deep Six Textbook” – their debut single which has already caused a stir on the internet – refers to the old maritime phrase meaning to throw something overboard and sets out LEG’s desire to throw the rulebook away. By their own standards the song is both lush and sepulchral and is intended to be the “calm before the storm” as the opening track. Chocolate Sludge Cake’ and ‘Chimpanzees In Canopies’ both relish in thrusting together seemingly incompatible genres such as R&B with cosmic synth psych; and stark minimalism with freak folk. They reclaim children’s fairy tales back from vacuous “Disneyfication” on ‘Rapunzel’, re-injecting the story with a dark sense of gothic unease. And ‘Sax In The City’ is a dystopian nightmare of people rendered robot slaves by smartphones and tablets – all the more striking for its jaunty lo-fi pop setting.

The name Let’s Eat Grandma was chosen in a rush the night before their first ever gig, from an old grammatical joke which highlights the usefulness of a well placed comma.