PUP release video for “Sleep In The Heat” 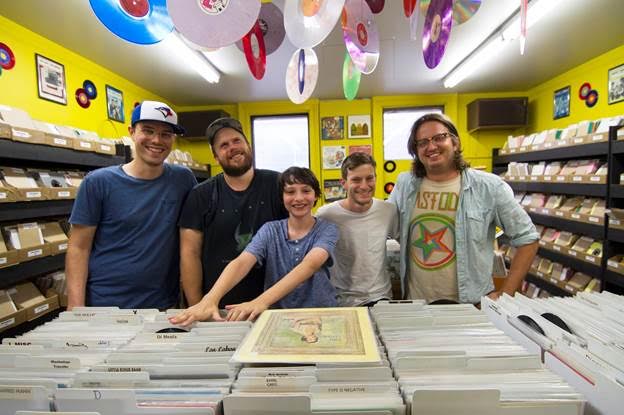 Three years ago, the world got a taste of PUP’s humble beginnings in their Juno Award-nominated video for “Guilt Trip”. While the story itself was fictional, the success that found PUP after the video’s release in 2014 was far from it. Today, the saga continues with their new video for “Sleep In The Heat”, starring Finn Wolfhard (Stranger Things) returning in his role as a young Stefan Babcock. The song appears off their latest album, The Dream Is Over, which was short-listed for the Polaris Music Prize.

Directed by Jeremy Schaulin-Rioux, “Sleep In The Heat” follows a young PUP on tour and the unlikely animal companion they meet along the way. The video also features glimpses of each member’s four-legged friends including Norman, the chameleon star of PUP’s “Mabu” video.

“‘Sleep In The Heat’ is a song about my chameleon Norman, who passed away while we were writing this record,” explains singer/guitarist Stefan Babcock. “Jeremy was the one who thought we should make a video for this song. He has this really weird one-eyed grumpy cat that he loves a lot, and I guess the song got him thinking about what it’s going to be like when she’s gone. Losing a friend is something so many of us have had to deal with, which is why I think this video is so powerful.”

“When I first listened to the song I was like, ‘Oh, this is super-dark, maybe about some girlfriend overdosing on heroin, cooped up in a bedroom or something,’” says Wolfhard. “I was filming a movie in Toronto and we were having ramen together – me, all the PUP guys, my mom, and Jeremy – and we were talking about the song. This was before they were planning to do a video for it. I said, ‘Do you guys want to do a “Guilt Trip part two?”’ jokingly. They said, ‘Yeah, we really want to.’ I told them “Sleep in the Heat” is one of my favorite tracks on the album and asked Stefan what it was about, if it was about a girlfriend passing away, and he was like, ‘Nah, it’s just about my chameleon.’ It was surprising. It’s pretty awesome that you can write a heartfelt song about your little chameleon.”

Babcock adds, “Big shoutouts to the little PUPs in this video, too – watching them bond and then say goodbye to that dog is one of the most heartwarming and heartbreaking things I can imagine. RIP all of our little friends. We miss you.”