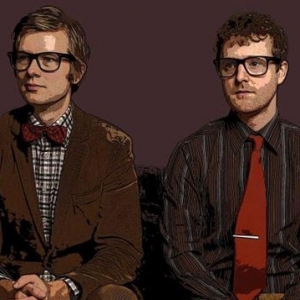 Public Service Broadcasting are excited to announce that their debut album, Inform- Educate – Entertain – is now streaming via NPR. The album is being released in the US next Tuesday, November 19.  On stage, J. Willgoose Esq. is as likely to play a banjo as he is to manipulate sound and sequences and MIDI controllers. …Then there’s Wrigglesworth on drums; he’s key to keeping this music fun, danceable and enduring. Together, the duo explores the past as it looks into the future, with music meant for clubs that doesn’t fit neatly into some EDM subgenre or nightlife cliche. It doesn’t force you to dance; it isn’t incessant so much as bouncy. it’s more Kraftwerk than Disclosure , reminiscent of in its detailed crafting of collages from found sounds. Still, it all sounds fresh”

The band recently played their first shows in the USA as part of the CMJ festival in New York City. Originally scheduled to play just one show once the festival started the band were quickly confirmed for two more including closing out Brooklyn Vegan CMJ’s Favorites party on Saturday night.

Public Service Broadcasting will be back in the US in February & March for a full tour and will be appearing at SXSW.