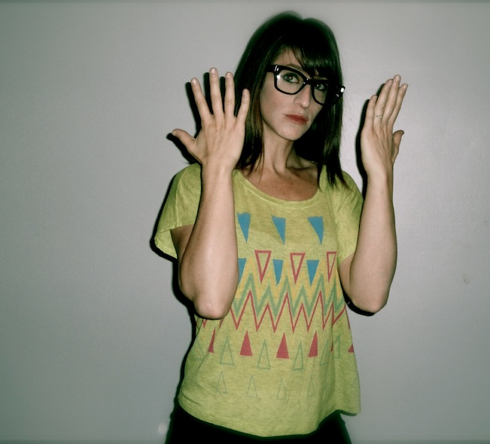 The Chicago-based electro-pop group Psychic Twin debuts their video for “Dream State.” The song is the B-side track on their Strangers 7″.

Two and a half years ago, Erin Fein began to pen a series of songs that would become the music of Psychic Twin. These songs emerged as intensely personal, nervously rhythmic, and indebted to the ’80s new-wave of her youth.  While recording by herself, doubling her vocals and singing ghostly counter-melodies, she was overcome with the surreal but persistent feeling that she was writing and recording with her twin. “In an ideal situation,” she says, “there would have been two of me singing and playing the music.”

Rather than a musical clone, Brett Sanderson provides a fluid backdrop, joining Fein’s new material with propulsive electronica and a shimmering synth-rock atmosphere. Lush synthesizer washes and incisive keyboard lines fade in and out over subtly persistent beats that begin simply, but reveal their complexity as songs take shape. The music is anchored by the bright melodicism inherent in Fein’s songwriting, as verses and choruses shift and expand over the course of a song. Psychic Twin makes pop music that is romantic and mysterious; infused with an ineffable longing for escape, for the unattainable, like the impossible desire to make music with one’s own double.