Indoor Pets have shared their the ‘pre-historically cast’ video to “Pro Procrastinator.” The latest track to be taken from their debut album, Be Content — out March 8 on Wichita Recordings — the video gives a rare insight into what dinosaurs (of a sort) get up to in their spare time. Impressively directed, devised and ‘starred in’ by the band themselves, the laugh-out-loud video is a once-seen-never-forgotten visual feast!

Recently wrapping up a U.K. tour with Bad Sounds and European tour with Ash, Indoor Pets’ rapid ascent doesn’t look set to slow down anytime soon. The band will play their first ever US shows in New York City & Los Angeles next week. Tickets are on-sale now at www.indoorpets.club and gigsandtours.com

Formed straight after leaving school in Sittingbourne, Kent, it wasn’t long before their effortless songs were attracting attention, with one of them making Record Of The Week on BBC Introducing and within two weeks Huw Stephens had picked up on the track. After a further couple of years of gigging and building up a devoted fan-base around the country they signed to Wichita Recordings and set about recording their debut album.

Co-produced by the band’s guitarist, James Simpson and Kristofer Harris and mixed by Claudius Mittendorfer (Weezer, Ash, Yak, Parquet Courts), the album is a bottomless pool of great tunes. Familiar feelings of not fitting in or wanting to play the hand life’s dealt you are delivered with self-deprecating wit and Glass’ trademark use of double-bluffing word play. Think Rivers Cuomo and a pre-sandpit Brian Wilson bunking off school to play records and snigger at the cool kids. They’re smart, life-affirming and all contained within a thumping primary-coloured pop wallop. 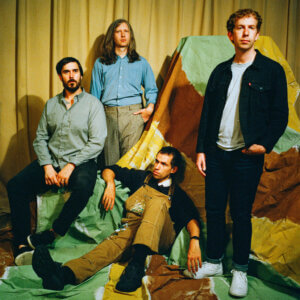