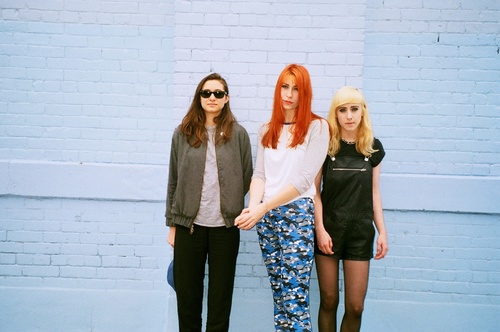 New England trio Potty Mouth has premiered their new music “Creeper Weed.” Directed by Abby Banks and shot in Los Angeles with a crew of young female skaters, the video was captured on a classic 90s skate video camera (Sony vx 1000 DV tape), paying homage to a decade that Potty Mouth is so
deeply inspired by. The single is from their latest, offering, the Potty Mouth EP – a project that defines their true punk sound. Potty Mouth is currently working on their new full length album. Lead singer and guitarist Abby Weems has been honing in on her impassioned songwriting skills, and was recently taking time to write with the band’s idols Nina Gordon and Louise Post of Veruca Salt.

Potty Mouth are Western, MA-based trio Abby Weems (guitar, lead vocals), Ally Einbinder  (bass) and
Victoria Mandanas (drums). Originating in 2011 from the hometown of guitar rock predecessors Dinosaur
Jr., Potty Mouth emerged from a casual, “why not?” attitude when Einbinder, who met Mandanas at
Smith college, set out to form a band with like-minded women who shared her interest in learning and
growing together as musicians. Though no singer was chosen at the time of formation, Weems emerged
as having a knack for melodies and lyric writing, and what started out as a casual pastime turned into a way of life; recording, making t-shirts, and planning tours soon came in natural succession.
One year after their formation, the band recorded a 12″ vinyl EP, entitled Sun Damage, released through three small,independently-run labels. Sun Damage.

In 2013, Potty Mouth signed with Brooklyn-based indie label Old Flame Records to release their debut
full-length album, the band began to tour more extensively, co-headlining their first full US tour with Perfect Pussy and Swearin’ in summer 2014, as well as supporting artists like Waxahatchee and Juliana Hatfield.

On August 21, 2015, the band released a five-song self-titled EP under their own imprint, Planet
Whatever Records. Produced by John Goodmanson (Sleater-Kinney, Blonde Redhead, Bikini Kill) at
London Bridge Studios in Seattle, the new EP shows off a new level of both songwriting and production
or the trio. Refreshingly candid, singer-guitarist Abby Weems weaves sarcasm and melancholia into a
passionate performance held together by drummer Victoria Mandanas and bassist Ally Einbinder’s solid
foundation. The crisper direction emphasizes the work the triad has put in since 2013’s Hell Bent, with more vocal harmonies and bigger production.