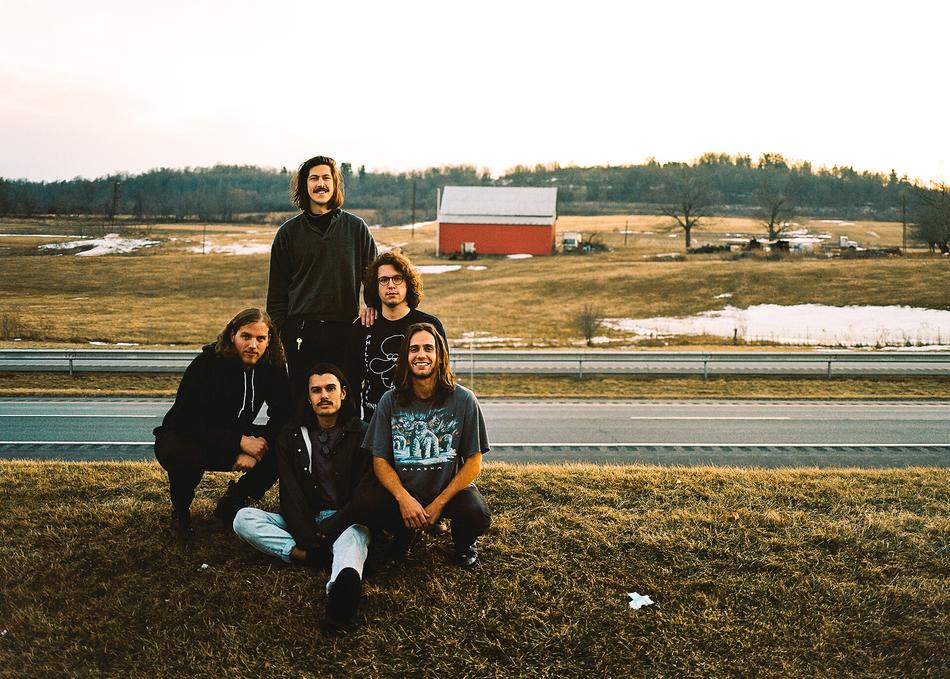 There’s something magical about Chicago quintet Post Animal’s debut album When I Think of You in a Castle. Mysticism and lore surround many of the psychedelic, riff-heavy rock behemoth’s influences including Black Sabbath and Steely Dan. Even the album’s title conjures images from fairy tales. And spirits might actually be speaking through the band: Post Animal recorded Castle in a lake house in northern Michigan that, if you ask them, was haunted. Northern Transmissions spoke with the band’s drummer Wes Toledo about moving on as a five-piece without extremely part-time member Joe Keery (who stars as Steve Harrington on Stranger Things), Toledo’s own status with the band, almost naming their album The Gators are Back in 3D, and what exactly happened at that lake house.

Northern Transmissions: One of the more unique things about Post Animal is that the band features four guitars. Do you have a replacement for Joe, and if he’s going to leave the band, would the band search for a replacement or just go on as the five of you?

Wes Toledo: We’ve been playing as a five-piece for a little bit over a year now. The last show he played with us was like last March, in 2017.… We just subtracted one guitar player and kind of rolled with it. Everything has worked out fine. Live, we’ve been able to cover all of Joe’s parts.

NT: You had been planning to move to LA or split your time between Chicago and LA. What’s your status now with the potential move and with the band?

WT: We’re gonna do whatever we need to do in order to keep the band going because we’re at such an important and exciting time in the band’s career. I’ve been actually kind of going out there whenever we have downtime and living with some friends. I’m actually still sort of semi-moved to LA but not really. I don’t really currently live anywhere. I kind of hop back and forth between Chicago and LA, and then my hometown is Nashville. As long as the band is based in Chicago and is thriving, then we’re gonna see it through.

NT: Speaking of trying to keep things going, I know that you all have a deep love of the DIY scene, playing DIY shows in Chicago. Within the last year or so, as the band has really picked up momentum, have you still been able to do many of those types of shows?

WT: Yeah, yeah, we’re gonna play some DIY shows in Chicago. Not many, to be honest, but we have played a lot of DIY shows in different parts of the country on tour. We’ll sometimes have an off-day on tour between shows, and we’ll decide that we want to book a last-minute DIY show. We’ve played house shows in Syracuse, and we also played in Massachusetts. So we still try and play DIY shows whenever we can. We just haven’t played one in Chicago in a while. It would be fun though. I kinda miss doing that. It’s where we made our bread and butter.

NT: You recorded [When I Think of You in a Castle] at your friend’s lake house in, was it south
Michigan?

WT: It was actually northern Michigan.

NT: I heard there were some undisclosed “spooky” things happened at the lake house.

WT: We think it was haunted. It’s one of those things where you’ll never really know. But yeah, there was some big doors shutting on their own. [Guitarist] Jake [Hirshland] was kind of in and out of sleep, like taking a nap one day, and felt something tugging on his hands. There was also something in the recording, in “Heart Made of Metal”, like towards the end. I hit the cymbal, and it almost felt like it was being played backwards. This one hit that I do kind of rings two or three times, and we never did that in the studio. That was totally something that just kind of appeared on the actual track. So that was pretty spooky.

NT: Do you believe more in the paranormal now that you had this experience?

WT: I personally have always kind of believed in that sort of stuff. I don’t want to speak for any of the other guys, but yeah, I would say that some of us may have been doubters. And I’m not saying we’re a hundred percent sure that that’s what it was. I’d never had any weird encounters, but Jake had the most weird, spooky encounters, and I think that definitely changed the way viewed the paranormal. [Laughs]

NT: Needless to say, the lake house is probably out of consideration for the next record.

WT: Probably for the next record, yeah, but I would always be down to go back. I would love to
go hang out in that place again.

NT: Bring a camera or something.

WT: Yeah, yeah, bring a camera and see if we can capture anything weird on tape.

NT: Did your friend tell you that this place had a bit of a weird vibe to it?

WT: She’s had experiences there, and her family members have had experiences at this lake house. As far as we’re concerned, there’s something kind of paranormal, spiritual going on in that place. And maybe it’ an old family member of hers or something like that. But we are pretty sure that something weird is occupying that space. But I think they’re friendly. I don’t think that they were ever hostile towards us in any way.

NT: Yeah, they wanted to see the record get made. Otherwise, they really would have fucked shit up.

WT: Exactly. Exactly. If anything, we were just kind of bothering them with all the wild ruckus.

NT: Finally, I want to ask: Is it true you almost named the album The Gators are Back in 3D? And why did you ultimately decide to go against that?

WT: [Laughs] Yeah. Yeah, we did. The Gators are Back in 3D was definitely more of a joke. That was tossed around after we saw some weird wildlife video. We all thought it was funny, but then when it came closer to actually coming up with a name for the album, we decided to go with something a little bit more meaningful, so that’s why we went with When I Think of You in a Castle, because I think it definitely encompasses the sound of the record as well as our feelings while recording it – much better than The Gators are Back in 3D. Maybe we’ll keep it for a side-project one day or something, an EP down the road. The Gators are Back in 3D has to be used for something. Maybe not for Post Animal but one of our wild musical journeys.