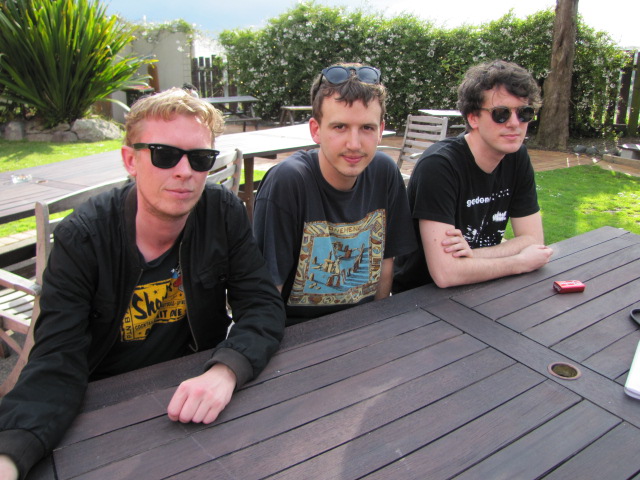 Popstrangers premiere their second single, “What Else Could They Do” off their debut full-length, Antipodes. They said of the track, “The initial cacophony that announces the presence of Popstrangers’ ‘What Else Could They Do’ is a bit misleading. While we begin with the grit and heft of a grunge-gaze basher, the New Zealand trio quickly lead us toward lilting melody… It’s no wonder then that they’re labelmates with Cloud Nothings — both bands understand the strange magic that arises from the right mix of bitter and sweet.”

Popstrangers formed in 2009 after the three members connected over their shared histories of bad day jobs, stints in other bands and, most importantly, their desire to create music with like-minded people. With a name conceived last-minute before their first official show, their ambitions have grown since the days of playing local gigs around Auckland. After releasing several singles on the legendary Flying Nun label, they have developed a strong following in their native New Zealand for their heavy but accessible sound and are set to export their noisy melodies to the rest of the world.

Recorded in the basement of a 1930’s dancehall, Antipodes features dissonant, claustrophobic melodies, anchored by the languid affectations of Flyger’s vocals, that bring a vintage feel to their decidedly contemporary garage rock. Channeling early Radiohead and kiwi indie bands of yore like Gordons, The 3Ds and The Chills, Antipodes further develops the band’s nuanced, distorted “pop,” created and cultivated from years spent honing their craft live.

Popstrangers performed at the CMJ Music Marathon this past October. They will be touring the U.S. more extensively around the release of their debut in the new year. Stay tuned!

4. What Else Could They Do