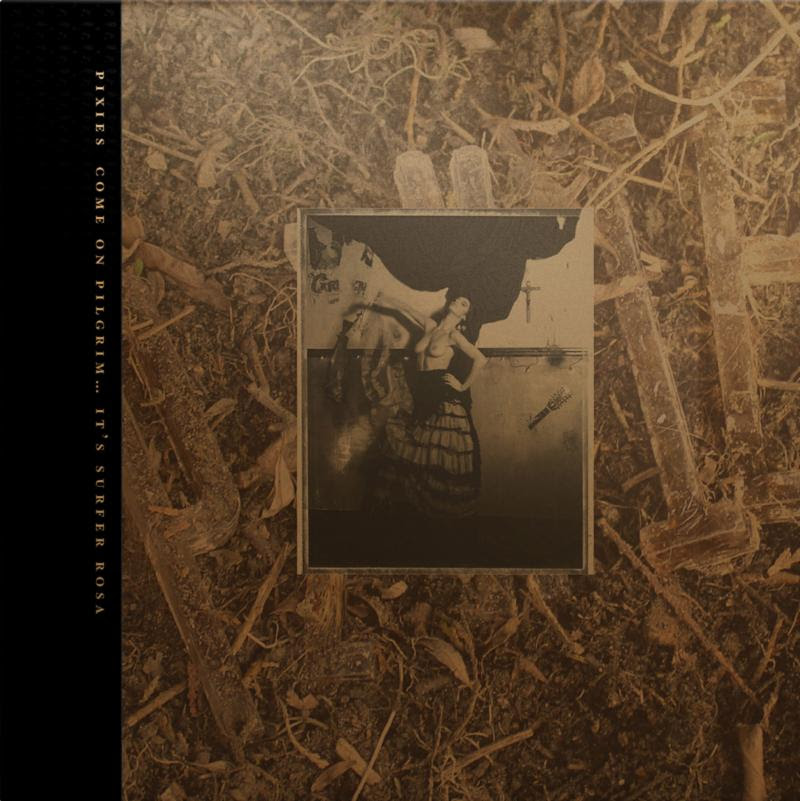 Pixies have announced Come On Pilgrim…It’s Surfer Rosa, three special 30th anniversary editions of the band’s‘ very first release, the eight-track mini-album Come On Pilgrim (originally released September 1987) and the band’s first full album, Surfer Rosa (released March, 1988). These special editions will be available as a three-CD box set, a standard edition three-LP box set on gold vinyl that includes a soft-back booklet, both released on September 28, and a deluxe edition three-LP box set on clear vinyl with a hard-back book, available this November via 4AD.

Vaughan Oliver returns as designer – as with all other Pixies sleeves – to stunningly reinterpret his original artwork thirty years on, delivering a fresh take while retaining Simon Larbalestier’s iconic photographs as the centerpiece of his design.

Surfer Rosa is a record made up of rage, religion, gore, incest and superheroes named Tony – a debut album so good that it’s since been seen as a masterpiece. Produced by Steve Albini, it was recorded in December 1987 at Q Division in Boston, MA and includes early Pixies classics such as “Bone Machine,” “Gigantic,” “Vamos” and “Where Is My Mind?” Come On Pilgrim contained eight songs from the band’s first-ever studio session, produced by Gary Smith and recorded at his Fort Apache Studio near Boston. The anniversary package also contains “Live From The Fallout Shelter,” a concert-cum-session that first aired in late 1986 on WJUL-FM in Lowell, MA.

These formative records showed the Pixies to be an alien breed; four oddball outsiders from Boston blending U.S. underground thrash rock, indie surf pop and Spanish-language Flamenco with the Biblical mythology of Black Francis’s childhood. They would go on to record another masterpiece in 1989’s Doolittle but it’s the gruesome glory of Surfer Rosa, and the ruined sexuality of its cover image (a topless Flamenco dancer in a crumbling Mexican bar) that set a fresh blueprint for an indie rock dynamism that not only planted the seeds of grunge (Kurt Cobain would admit that he was trying to imitate the record while writing Nevermind) but of much of the best rock music made since.

Pixies will play Come On Pilgrim and Surfer Rosa start to finish at five intimate, sold-out shows at London’s Roundhouse this October. Pixies are currently co-headlining a North American amphitheater tour with Weezer, plus playing a handful of solo headline shows.