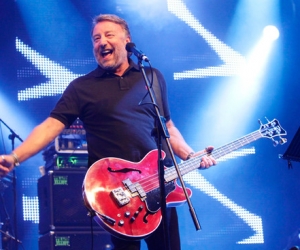 Peter Hook & The Light are to debut their performances of the first two New Order albums, “Movement” (1981) and “Power, Corruption & Lies” (1983) to North American audiences for the first time in September 2013. Support at all headline dates will come from ‘Slaves of Venus’. In the first of a string of international dates to be announced for The Light, this nine date run of the United States along with three dates in Canada sees the band return to cities previously visited, as well as some for the first time, and marks their third tour of North America after dates in December 2010 and September 2011 performing Joy Division’s “Unknown Pleasures” and “Closer” albums.

All of the shows feature full performances of both albums in full, sequential order, which has become a hallmark of The Light’s sets, and will also include singles and B-Sides from the corresponding period including “Everything’s Gone Green”, “Temptation” and “Blue Monday” which New Order generally didn’t include on the releases, preferring their LPs to stand alone in comparison to the singles.

Both albums mark the early development of New Order’s sound whilst also, notably on “Movement”, referring back to the Joy Division template. The final album from the band to be produced by Martin Hannett, Movement’s reputation has grown stronger amongst fans since release for its experimentation, Peter Hook taking lead vocals on two of the album’s key tracks, opener “Dreams Never End” and the seminal “Doubts Even Here.”

Containing some of the fans persistent live favourites such as “Age Of Consent” and “Your Silent Face”, as well as the much loved album tracks, “586” and “Leave Me Alone” it was this album that cemented New Order’s reputation and showed a cohesiveness and new found confidence emanating from the band