Our interview with Spoon’s Britt Daniel 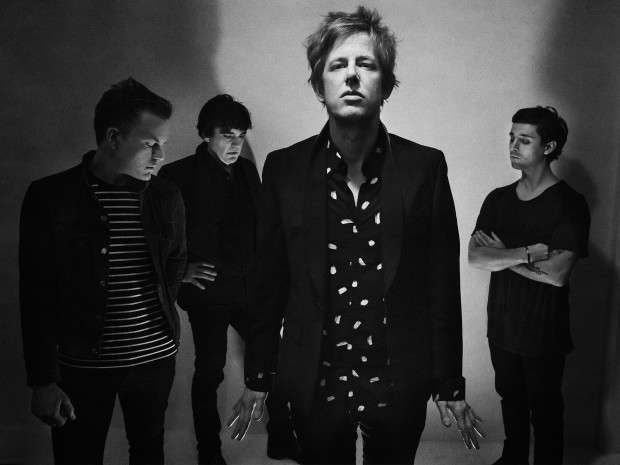 Spoon's Britt Daniel calls the band's newest album "futuristic."
Share on TwitterShare on PinterestShare on PocketShare on RedditShare on FacebookShare on Email

Spoon is nothing if not consistent. Coming up on their 25th anniversary as a band, the Austin quartet have the distinction of having been named Metacritic’s Artist of the Decade for their excellent four-album streak between 2000–2009. Hot Thoughts is their latest record, a dancey, synth-heavy, and remarkably weird record that lead singer Britt Daniel describes as “futuristic.” Already one of 2017’s strongest efforts, the band has embarked on their biggest tour yet in support of the record, playing a fantastic set at Vancouver’s Malkin Bowl on September 2.

Backstage before the show, I sat down with Britt to talk about the recording process, his love of Prince, and the tenth anniversary of their masterpiece Ga Ga Ga Ga Ga.

Britt Daniel: It’s going good. We’re out all the time.

NT: Are you guys near the end of it?

BD: No. [laughs] In this run, we have another two weeks, then we’re off for ten days and we go back out for three weeks and a half. We’re going to go until the end of next summer.

NT: That’s a lot. How do you guys handle all that touring?

BD: It’s more than we’ve ever done before. I love playing shows, I just — there’s got to be a balance. My liver needs a break every now and then.

NT: How has the reaction been playing the new songs for an audience?

BD: It’s been good. Really good, because I think we’ve been doing the best shows that we’ve ever done. You’ve seen us before, so you’ll see tonight. It’s been — well, I’ll let you do the description, but I think we’ve got a really good show going on.

NT: You guys are celebrating the ten year anniversary of Ga Ga Ga Ga Ga — do you always say the whole title?

BD: Somebody asked me that recently. Ga Ga Ga Ga Ga, you say it like that, or Ga Ga sometimes. Sometimes it gets written G5.

NT: How do you think the record holds up?

BD: I think it’s a really good record. We remastered it for this reissue, and when we did I listened to it front to back a couple of times just to make sure that the disc was good and the mastering was good, and as soon as I got done listening I sent Laura an email at Merge [Records] and said, ‘damn, this is a good record.’ I dunno, we’ve got a lot of good ones.

NT: Do you think of it as your commercial breakthrough? “The Underdog” was everywhere for a while, I heard it most recently in the new Spider-Man movie.

BD: Every record that we put out for a long time leading up to Transference got bigger and bigger, several times bigger than the one before, so every record kind of felt like a break for a while. Definitely that one had some big stuff on it. “Cherry Bomb” did pretty well, too.

BD: I had just moved to Portland when this record came out, and there was a place called Fred Meyer right down the street from my house, and it’s basically like a super Wal-Mart. Not only do they have groceries, but they have underwear, they have light fixtures, and they have a record department and everything. And Spoon was the number one selling record that summer when I moved to that house, so that felt like something was happening. It was unreal.

NT: I think of Hot Thoughts, having listened to it a few times now, as one of your guys’ more experimental records. Do you feel that way?

NT: Did that come together in the studio, or was it written that way?

BD: The songs just developed that way. There’s that one song “Us” which is pretty far out, the last song, and it just happened by accident. We were working on a different song and I called this guy in LA to come over to my house and play saxophone on the beginning of a song, and instead he played all the way through the song, and it’s a long song. He played it through twice harmonizing with himself, and when he left I listened back to just the horns and I thought, this is pretty fucking good. Like, maybe this is the song. So we basically threw away most of what had been on that song before and just started over with the horns.

So that kind of thing, it didn’t happen in the studio per se, but it was part of the recording process. I think that good records are always the combination of what you directly try to do and what just happens, and that just kind of happened.

NT: There’s more synths on the record, too. Did that just happen as well?

BD: Well, Alex [Fischel] is in the band now, and he can play really well and has a lot of great textures. I think we were aware of wanted to make the record sound futuristic, although we didn’t talk about it specifically. So I think that leaning on Alex came naturally.

NT: Is there any one song on the record that really stands out to you?

NT: “Pink Up” is my favourite song on the record, and I hear some Krautrock, and a little Brian Eno in there. How did that song come together?

BD: We put some stuff down on tape — some drums, some bass, some keyboards, a lot of keyboards, some vibraphone, put it into the digital realm. And once it was there, we kind of just copied and pasted. So it kept getting longer and longer, where I’d say ‘that was pretty good. Maybe we should make the intro two or three times as long,’ and just record new stuff on top of it. So it was that kind of thing where every couple of weeks, it got a little longer.

And then the whole end section where the drums drop out and it goes to the strings and all that, that was the very last thing we added. It just ended with the drums for a long time, and then I said to Alex, ‘we need to put a creepy ending on this,’ so I told him to reference the end of “Purple Rain,” which is a pretty straightforward song until the end where it just sort of drifts for a while, and that’s the kind of vibe I wanted to have.

NT: Who were you listening to when you were writing the record? I know you’ve mentioned in interviews that Prince and David Bowie were a big part of your repertoire.

BD: Well, they always were a big part of what I was listening to, but especially last year. The day Prince died, we were in the studio. So when things like that happen, all the emotions wash over you. You experience the music in ways that you haven’t since the first time you listened to it. That, for me, made me dive deep. I was really going deep on both of those artists, especially Prince. But other than those two, I really like Thee Oh Sees a lot, I probably saw them a couple of times while we were making the record. Krautrock, punk rock, they kind of do everything. And I was listening to a lot of The Cure, The Head on the Door and Pornography.

NT: I’ve heard this described as your “dance record.” Do you think that’s accurate?

BD: Cool. It’s fine by me if they say that. I wasn’t expecting that, but when they started saying that — and a lot of people starting saying that right when the record came out — I was like, alright. It’s a good selling point.

NT: You guys are back on Matador now, the first time since your debut. How did that happen?

BD: Well, we always were in touch with those guys, even though we stopped working together we would see them pretty frequently. We’re buddies, we played their anniversary birthday party show in Vegas. We have a good relationship with them and it was just a thing where, we made the record on our own the way we always do, we pay for it ourselves and then we say, ‘who wants to put it out?’ And they had tried to put out our other records recently too, but they had come to us by the time we had already made decisions with Loma Vista, for instance. We’d already made our call before we knew Matador was interested. But this time, everybody got a shot at it and Matador made a very compelling argument, and part of that argument was the Beggars system that they’re in, which is a pretty amazing system.

BD: They’re part of the Beggars Group, which has XL Records, it has 4AD, it has Young Turks, a lot of good labels with a lot of very good bands. And even though it’s an independent label, it sort of has the clout and organization of a major label, and it’s worldwide.

NT: You guys seem to try something new on every album. Are there any genres you haven’t tried yet that you’re hoping to try on a future album?

BD: Big band jazz, haven’t done that yet. One mic in a hotel room-style Hank Williams recordings, that kind of thing, that’d be fun. Norwegian death metal. I don’t know where we’re going to go next. Every record is such a process, and especially now that we work with this guy Dave Fridmann, who’s one of the greatest producers in the world, a guy I love dearly and makes amazing records. But where he works is up in the woods of upstate New York, and it makes me crazy to go up there. So I can’t even fathom going up and spending — because it’s such a long process to make a record, and I haven’t really thought about it yet, you know?