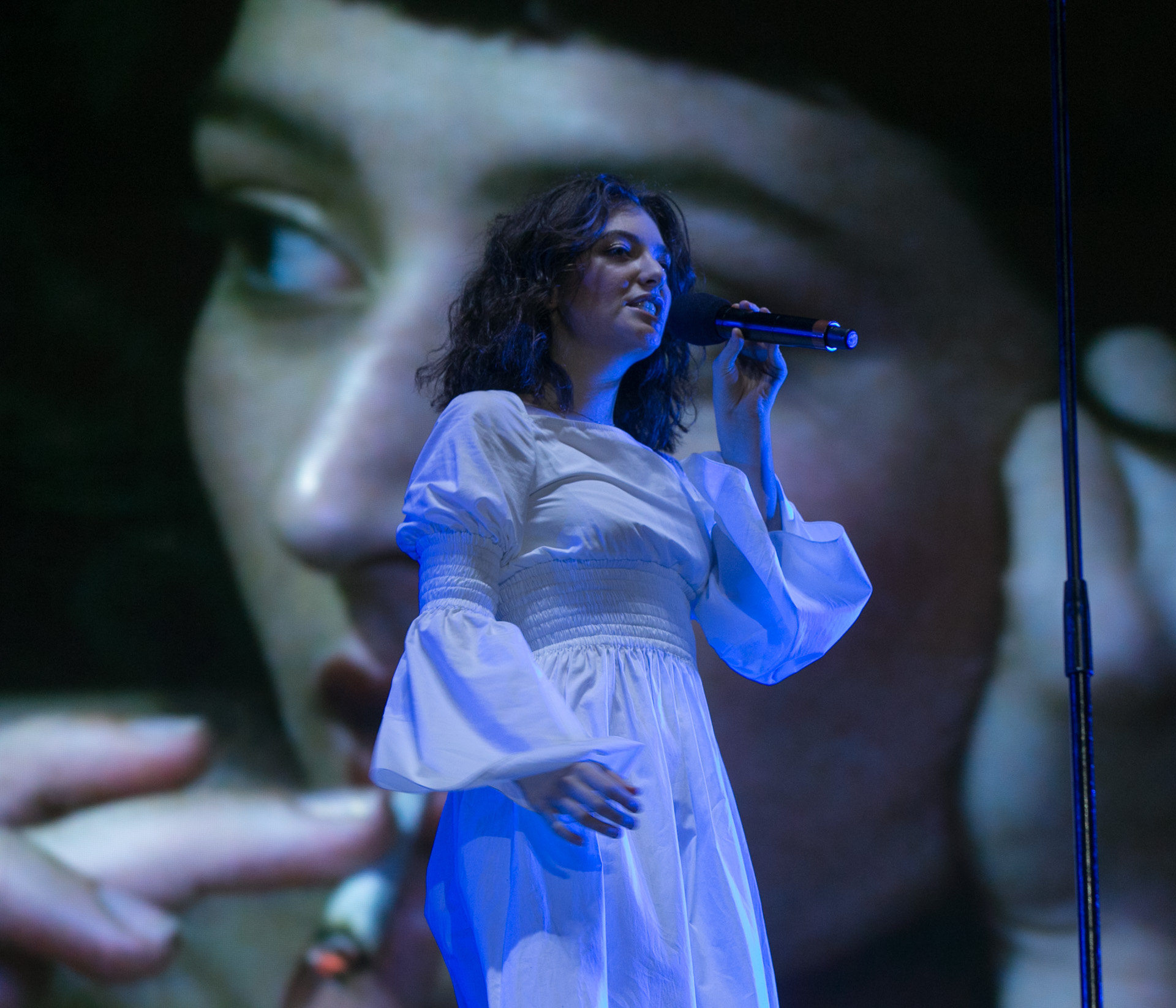 Lorde by Pat Beaudry, @ Virgin Mobile River Stage
Share on TwitterShare on PinterestShare on PocketShare on RedditShare on FacebookShare on Email

The opening day of Osheaga started off on a rather disheartening note. After some early sets, lightning ended up cancelling highly anticipated sets from Noname, Angel Olsen and De La Soul. With the stellar line-up still on the docket however, the day really drove the momentum home once the sets kicked back.

Launching into his r&b set with more energy than you would expect from his music, Samphha brought the heat. Making it easy to forget all the rain of the early afternoon, he moved the audience with stripped-back renditions of tracks like “(No One Knows Me) Like The Piano.” Grooving with the crowd, he made his tracks like “Too Much” really breathe. Sending his entire band behind a small drum kit, the four of them brought new life to “Without,” giving a lively energy that the crowd ate up.

Filling the stage in numbers and sound, the lively and fantastical sounds of this Scottish indie band brought one of the days most wholesome and enjoyable sets. The deep grooves of “Sukie in the Graveyard” found the crowd moving around, while following Stuart Murdoch’s every waving lyric. Between handfuls of extremely enjoyable new tracks, they laid out “Perfect Couples” in dedication to all the people who had been married since their last Montreal show. Nodding to the unfortunate irony, Murdoch played the bongos as stage hands were still carrying them in, as the music video added a cool visual element in the background. Through “Like Dylan In The Movies” trumpet, violin and even cello’s rang out, with Murdoch standing triumphant over the crowd, later taunting the rain from the crowd to an immediate mic folly (earning laughs and fill-in vocals from his band). Closing on “The Party Line” many of the remaining puddles were jumped in with reckless abandon.

Delivering what might have been the tightest and most exhilarating set of the night, French DJ duo Justice melded their entire career into one set. Filled with die-hards and new fans alike, the duo’s ability to flawlessly blend new tracks like “Safe and Sound” into classics like “D.A.N.C.E.” found the crowd filling in lyrics to whatever two songs they would blend at any given time. Soaring through the epic openings of tracks like “Genesis” while melding it into parts of “Pleasure” along with a seamless playthrough of virtually their entire new record made for a stunning set. Getting tracks like “Stress” and “Phantom” thrown in the heavy duty mix made for a set that had everyone enthralled, well before the god-tier light show they had going on around them. Coming back on to a hefty crowd cheer of “We Are Your Friends” that went on for minutes, the band was clearly game, running to their decks to switch into the track. Along with the flashing visuals the duo’s minimalist coordinated head-bobs and turns added a certain sense of cool and excitement to the set that had the whole crowd moving.

Lifting the spirits of the repeatedly drenched crowds at Osheaga, Lorde took the stage with an umbrella, laughing about how much she actually loves the rain. Stirring the crowd up with “Tennis Court” she quickly got them moving again with her Disclosure collaboration “Magnets.” Bringing on an ever-growing group of dancers around her on stage, she pointed out that she and her crew had a lot of pent up energy to let out from their rained-out set at Lollapalooza. Keeping to the classics with “Buzzcut Season” she had the crowd chanting to her on “400 Lux.” Switching to the dance of new tracks like “Sober,” she took a moment before starting “The Louvre,” saying “If You have a crush, close your eyes and sing along.” Going into “Homemade Dynamite” she brought out collaborator Tove Lo, who seemed even more energetic on stage with Lorde than in her set earlier that day, even handing over her raincoat to Lorde. Burning the house down with tracks like “Royals” and “Perfect Places,” her most tender moment of the set came on the heartbreaking “Liability.” Ending with a one-two finisher on “Team,” she brought out every last ounce of the audience’s energy as she closed on “Green Light.”