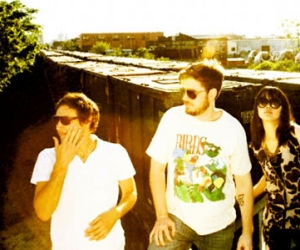 Brooklyn trio, Old Monk, have released the first in a series of 2013 singles, “Seymour”, today on Eenie Meenie Records – You can stream above. Guitarist/vocalist Josh Carrafa met drummer Ian Burns while attending college in Colorado, bonding over a mutual love of music and performing together in various local bands. The two started to collaborate on songs via the Internet when Carrafa moved to New York to attend law school, writing much of what was to become their debut LP, Birds of Belize, before Burns followed to New York and Old Monk was formed with Tsugumi Takashi joining on bass. Old Monk released Birds of Belize, in early 2012.

“Seymour” was written by Carrafa, produced by Takashi and recorded/mixed by Dan Shatzky at Vibromonk in Brooklyn.  There’s a sense of classic Midwestern power-pop, fueled by Pavement and echoes of Pinkerton.  Of the track, Carrafa said, “What is it about? Yearning?  You see, existence is an interesting situation in which to find yourself.  On the one hand, sometimes you get to do some fun things.  On the other hand, the things you are unable to do tend to seem a lot more fun than the things you actually end up doing.  And on top of that, the things you actually do never seem as cool as the things people did in the past.  The result is yearning.  A permanent layer of yearning and dissatisfaction that covers everything that happens to you throughout existence.  Often I sit, and I yearn. “Seymour” is a JD Salinger character in the story of the same name. He suffers from this affliction a bit.  A fear of the future.  A longing for the past.  Constant dissatisfaction.  And yearning.  I like JD Salinger.  He was a good American yearner.”