6 months ago
Words by Adam Fink 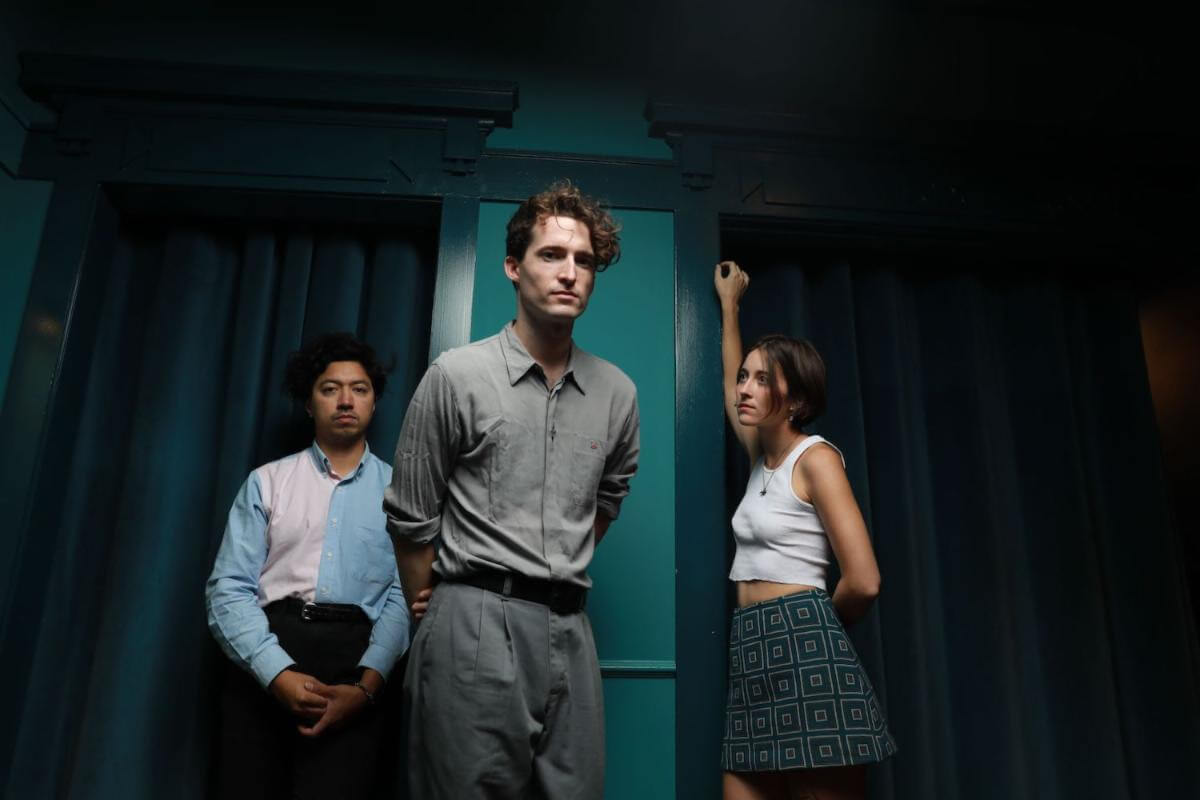 The path forward for Nation Of Language hasn’t been the typical trajectory of a contemporary band. Their first album, Introduction, Presence, was slowly crafted over four years. When the band, made up of Ian Devaney, Aidan Noel and Michael Sue-Poi, could scrape enough money together to record, it would just usually be a one off single. Over that stretch of time though, Nation Of Language started to slowly yet steadily build up a fanbase online. These were people that they found were genuinely excited about the music they were making. Their music, inspired by 80s synth pop and early punk and new wave albums, was making its way into the hands of the kind of encouraging fanbase that soldiered the trio to keep going. When Devaney and Noel got married, they asked the guest to not get them physical gifts but to contribute to a fund to help them craft what would become their debut album. When the record dropped in 2020, Nation Of Language were only able to finish three shows of their world tour before having to come home as a result of the pandemic.

What felt like the start of a burnishing career suddenly felt cut short by forces out of their hands. The album, though, persisted. Introduction, Presence was ultimately embraced by music bloggers, radio stations and fans around the world emboldening the band to carry on. Carry on they did and now we have been treated to their fantastic new album, A Way Forward. The album is chock full of huge hooks, airy 80s inspired synth work and the overcoming presence of 70s electronica and Krautrock. With the album officially out today via Play It Again Sam records, the band has finally been able to embark on that tour that got stolen out from underneath them. Armed with two albums worth of material, Nation of Language is more than ready to take on whatever gets thrown in their direction. When we catch up with Devaney from a tour stop in Virginia, he takes us through the creation of the album, his inspiration behind it and the feelings of finally being able to take his songs on the road.

“It’s been so nice to get out on the road and actually meet our fans for what feels like the first time,” Devaney explains in his calm demeanour. “We were three shows into a tour when everything got shut down so it felt like we never had that opportunity to connect with people.” The experience of not touring their debut and having to come home was strange but Deveney and the group jumped right into the making of A Way Forward. “It felt like we were The Beatles,” he says laughing on starting right into the second record after the first without touring. “It was rough though. We always felt like touring was the way that we would find our fans and win people over. I really kind of felt like we were doomed because that was the only way I knew how to do it. Then all these radio stations started playing it and other places were reviewing the record and it was able to just kind of find people because these few champions popped up and were really trying to spread the word.”

Now, actually coming to these places where Nation Of Language were championed has been really amazing for Devaney and the band. “We were just in Seattle and got to do a session with KEXP, which was so weird after spending so many years watching those online then to actually step into that room ourselves, it was such a wild thing.” The fact that institutions such as KEXP embraced Nation Of Language is only a testament to how strong of a band they are. When everything came crashing down, Devaney admits he only had a couple really full formed songs for their follow up record.

“There were a few songs that felt like they were pretty fully formed and a number of others that weren’t but these ones were ones that we felt like we could really explore while we were in the studio.” Exploration is a huge part of what Nation Of Language do. A Way Forward is the band exploring their own music’s relationship with early 70s electronica and Krautrock. “The way that these genres allow for a little more space to think is something that appeals to us,” Devaney says about where the record’s inspiration came from. “There is a simplicity to them and a lot of the time the songs are very long and are doing their own explorations. There is this artist called Laurie Spiegel, who was an early synth pioneer and she had this record called The Expanding Universe and we were listening to that a lot when we were working on these songs. As these songs were going into the computer, we were all running around the studio flipping knobs on all these effects units and synthesizers and it felt like a very living document of those moments. It’s that sort of spirit that is found in Krautrock and electronic music from that era and I wanted to try to capture a piece of that.” The idea of making what is normally thought of as cold and mechanical music and the irony of turning the experience of capturing it in such an organic way, isn’t lost on Devaney. “Our mastering engineer had this book in her studio that was this compilation of interviews with famous producers and mixers and in it there were two that caught me, one being Kraftwerk and the other being Brian Eno. Two artists that I would say are hugely inspirational to me but Kraftwerk kept talking about how they want everything to be as inhuman as possible. Like they want to pull as much humanity out of the music as possible so that it’s as cold as can be and then Brian Eno was like,”I want to buy broken synthesizers so I can make things as flawed and as human as possible”, and I feel like there’s that dichotomy that lives inside my head.”

However those two sides of Devaney’s musical brain struggle against each other, the outcome has been nothing but wonderful. Nation Of Language may have felt doomed by the circumstances they found themselves in at the beginning of their career but they’ve taken that hardship and have crafted not only a beautiful new album but also a true way forward.

Order A Way Forward by Nation of Language HERE