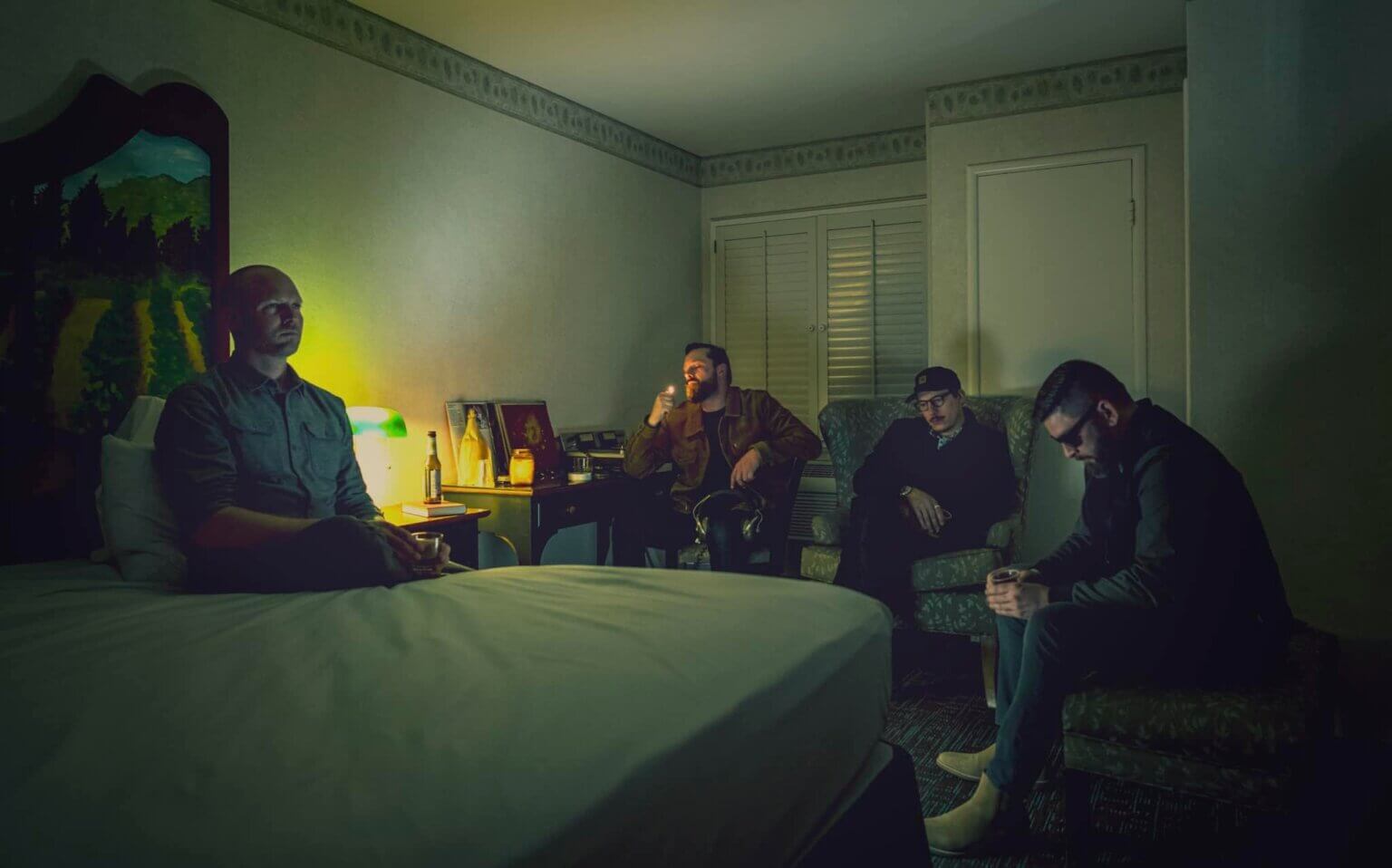 The way a story can be told through music is best exemplified in a concept album. There are linear themes and the setting is practically limitless. It can pertain to a certain situation, event, atmosphere or place. For San Francisco psychedelic soul act Monophonics, their latest album Sage Motel that came out via Colemine Records on May 13 uses a local establishment of the same name as an inspiration. It also could be their most heartfelt and emotional release so far with the listener guaranteed to feel something after they press play.

I recently had a talk with vocalist and keyboardist Kelly Finnigan about where the actual Sage Motel is located, handling the writing, arranging, producing, recording and mixing, having a bunch of different instruments at his disposal and what he hopes people take from the album after listening to it.

Northern Transmissions: Where is the actual Sage Motel and how did it inspire the songwriting within the record?

Kelly Finnegan: Just to be clear, there’s multiple Sage Motels if people are really looking for a place called Sage Motel. The one that inspired me is in Oakland, it’s off of the 580 when you’re going between Hayward and Oakland so it’s kind of in the east side of the city. It’s something that stuck out for a long time after driving by it tons of times, this goes back 15 years so it’s something that’s been floating around my head for years and years. I’ll kind of forget about it but then I’ll drive by it again, there’s just something to it that always spoke to me and stuck with me. As we started writing the record, the second song we started writing started to create a narrative and a story about a gentleman encountering a woman who turns out to be a prostitute and this is definitely not the world he moves around in.

He’s a very straight-laced, honest, good, 9 to 5, pays his taxes kind of guy, but this physical encounter, the physical relationship, the chemistry and the way they are when they’re together is really jarring for him. It opens up this whole new world and this whole new feeling. As I was putting this together and writing it, instead of saying that this song was solely going to be around that I put another kink into it and I said that I wanted each song to be about something that happens at the Sage Motel. As I’ve said, because it’s something I’ve driven by and has stuck with me I think when my brain went to wanting to talk about where they were, for some reason the Sage Motel came to mind and I liked it. It felt good, it felt natural so I ran with it and that became the title track and ultimately that night sparked the idea that there might be more to this Sage Motel thing.

When I came back to the studio the next day, I started brainstorming and it started unraveling from there in terms of it being a concept record with each song representing a story regarding what a person is going through in a room. What if each song represents something different that someone’s dealing with?

NT: I think it’s quite an interesting concept. Along with writing and arranging the lyrics, you also handled the producing, recording and mixing. What’s the experience like for you shifting to the other side of the album making process after the songwriting and performing is completed? Did you find yourself making any major adjustments?

KF: I joined the band in 2011 and the first LP we recorded I co-produced so I’ve either produced or co-produced Monophonics records as long as I’ve been in the band. I’m pretty used to the role, I just look at it from where it starts off writing and I’m sitting there as basically the keyboard player and the co-songwriter. As we’re getting into the song, I’m thinking about it from the standpoint of production. I’m thinking about it from the standpoint of whether or not it’s a good key for me to sing in, how the tempo is, what the arrangement is like and which instruments are being featured. There’s a lot swirling around in my head as we’re writing it.

I’m kind of folding all of these different things into pieces of paper that say how I want the drums to sound like, what the bass should sound like, etc. Obviously there’s a lot of freedom given to Austin [Bohlman] on drums and Max [Ramey] on bass because there’s a lot of trust between us that we’re going to get a good sound out of our instrument, we’re gonna come up with a good part and we emphasize that. Parts are such an underestimated thing when it comes to writing songs, writing music and making records. The parts are what you remember, those musical hooks that musicians come up with are sometimes what draws you into the song more than the lyrics or the melody. You think of a song like “My Girl” and everybody can hum that first guitar line, not everybody but you know what I mean.

KF: That can be said for other records that are modern and popular today where there’s a musical part that’s the key to the success of the song, so that’s another thing we stress. There’s all these elements that I’m focused on and listening for while trying to piece them all together and still just being a guy in a room writing a song with other people.

NT: When it comes to the instruments, you played a wide variety of them on the record including both a Hammond and Farfisa organ, a Fender Rhodes electric piano and a Korg analog synthesizer just to name a few. Do you consider yourself to be a musician who always wants a variety of tones and sounds at their fingertips?

KF: Definitely because those sounds inspire the parts I was speaking of. Those sounds inspire chord progressions, they inspire melodies. If you sit down and just write at a piano all the time, it’s going to change what sounds attractive because you’re going to play something that sounds really good through that instrument. Then you might walk over to an organ, play that same thing and while it sounds cool it doesn’t have that same feeling, it doesn’t have the same effect. If I play it on a mellotron, a clavinet or some sort of electric piano like a Rhodes or a Wurlitzer it’s going to be totally different. Because of those different tones, textures and things of that nature, the songwriting process tends to move in a different direction because you have those sounds. It’s like a guitar player having effects pedals versus plugging right into the amp. He’s got a phaser, he’s got a delay and it’s going to play into what he writes.

NT: Was there anything majorly different about the making of Sage Motel in terms of the recording process, setting, collaborating or anything else that makes this album stand out from the rest of Monophonics’ discography?

KF: I really wouldn’t put anything a certain way that says it stands out because for the most part, we made this record very fast compared to our past releases. We’ve never mandated for ourselves a certain amount of time to make an album where we start on a specific date and we have to get it done by a later date months later. We’re not going into this with a bunch of rehearsed, written songs, when we start a record we get in a room and we write the first song. It’s all from scratch, if we sit around for a few hours and we work on that song while writing it we either say that it feels complete and good and we might record that day to do a few takes or we might say that it sounds good, we’ll walk away from it for a couple days, then we’ll finish it up and record. There’s a process of writing it and recording it so the record was written and recorded between March and June of last year, which is fast for us.

There are other records that took a lot longer because we didn’t have a set block of time. In the past it was always like we’re going to make a new record and once we feel like it’s complete then we’re done. This time around was very different, when you know there’s a finish line quickly approaching it changes the workflow. I think because it was so consistent on our part with us getting together, writing, recording and working on the record, there’s a certain mood that’s encompassed within the album.

NT: What do you hope people take from the new album after they give it a listen for the first time? What do you want the listener to absorb from Sage Motel?

KF: The stories, the songs, the words, the music and the moods. It’s a very moody record and I think the stories are important because if you’ve lived a full life, I’m pretty confident that you’ve felt every emotion, you understand every lyric, maybe if it hasn’t hit you personally you have a friend who’s gone through it. The record deals in many different things ranging from falling in love, being in love, complications of love in relationships and things of that nature. There’s also heartbreak and loss, breaking up and there’s a song about today’s society called “Let That Sink In” which is really about slowing down and processing the pain, processing the joy and processing being in the moment of life. Put your phone down, grieve, understand how to look the good or bad in the eye and let it happen because it’s going to be ok, you don’t want to avoid it.

There’s another song called “Broken Boundaries” that’s about relationship boundaries and healthy relationships. “Crash & Burn” is about being a workaholic and all these songs are very personal. At one point, all I did was work, produce and make records which affected my personal life. When all you do is work, there’s no balance and balance is the key so I hope that these songs reflect something in people’s lives and it speaks to them. It’s really about the songs and the moods of the music, we want to make people feel like they’re putting an old jacket on. We want it to feel familiar because there’s comfort in that while also offering this brand new piece of music and art for people who love Monophonics.